Sean Moncrieff: ‘I’ve bumped into people with whom I’ve had friendly exchanges on Twitter. And it was weird’

What are we supposed to do without phones? Look at people? 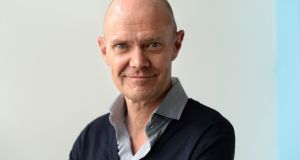 ‘Because I had left my f**king phone at work. I was marooned with my grief.’ Photograph: The Irish Times

The other day I walked out of work without my phone. I didn’t notice at first. No: I didn’t believe it at first. I didn’t have time to walk back so I kept patting my pockets and compulsively rummaging through my clothes like some small rodent had scurried in there.

It was the first stage. Denial.

Even though I didn’t have the phone, even though I could think back and know exactly where I had left it, it still didn’t feel true. It would have felt true if I’d been able to text someone. Left my f**king phone at work! But I couldn’t. Because I had left my f**king phone at work. I was marooned with my grief, unable to push it out and get a sympathetic reaction in return. The only person to tell was myself, so I muttered angrily as I walked, hoping passers-by would think I was on hands-free.

Forget bargaining: you can’t. There were people I needed to tell that I was now uncontactable. But I couldn’t. Because I was uncontactable.

I slumped into a seat on the DART and told myself I was an idiot, idiot, idiot. All around me, other travellers were absorbed in the warm glow of their devices, contentedly scrolling and typing and watching Netflix. Idiot.

Now you may be reading this and agreeing that I am indeed an idiot. I’d get the phone back in the morning, and in the meantime, what was I missing? The answer is: I don’t know. I wasn’t waiting on some vital communication. Having to wait an hour to hear about the latest news story, big or small, would make little difference to my life. Yet, I had a clawing sense of anxiety. I didn’t feel whole.

At dinner that night – having reached acceptance – I told everyone about my phone trauma. They made pained faces: like I had a bad limp or a cyst on my forehead.

My son, who recently had to endure six weeks without a device, (dropped it down the toilet), said it was quite nice not to be enslaved to his phone, yet he was relieved to get a new one. “I mean, it’s weird not to have it. If you’re standing in a queue, what do you do? Look at people?”

Of course not. You look at your phone: at people standing in other queues who are looking at you standing in yours.

That’s what it was. I wasn’t particularly distressed about being late to something on social media: it was more that the phone has become a part of how I relate to everything else.

My device mediates the physical world around me, helps me communicate with it, understand it; deal with lapses in knowledge and social anxiety. Humans are herd animals, yet we seem more fearful of each other than ever before: especially in our baffling, real-world complexity.

On occasion, I’ve bumped into people with whom I’ve had friendly exchanges on Twitter. And it was weird. A static picture and typed words transformed into a breathing human, with facial expressions, tone of voice, physical stance. It was almost unbearably vivid.

Much safer to communicate from behind a screen, where we can control the version of Me we project outwards. It strips away the troubling mysteries of other people and of ourselves.

The next morning the phone was waiting where I had left it.

There wasn’t a list of missed calls or panicked text messages. I had missed exactly nothing.

So did I turn it off then?

Of course not. What was I going to do? Look at people?