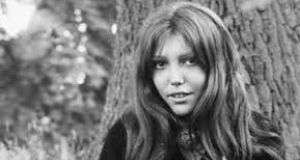 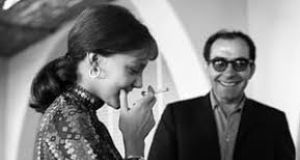 Wiazemsky with Jean-Luc Godard in Venice, 1967.

“At the age of 17 I was chosen,” recalled Anne Wiazemsky of the moment in April 1965 when the film director Robert Bresson cast her in Au Hasard Balthazar. She had no formal training – for Bresson an essential requirement – and, as well as an aura of mystery, possessed a soft, flat voice perfectly suited to deliver opaque lines. She appeared at once fragile and headstrong, introspective and direct, sensuous and ironically detached.

She embodied the ambiguousness of the film’s central character, the young farm-girl, Marie, developing a profound emotional connection with her pet donkey, Balthazar, whose brutal life mirrors her own captivity. “I’m inventing you just as you are,” Bresson said to Wiazemsky. The result was an extraordinary, magnetic, debut performance that propelled Wiazemsky, who has died aged 70 of breast cancer, to stardom and an illustrious career as one of the most distinctive French film actors of her generation.

Central to this process was Jean-Luc Godard, who was immediately captivated by Wiazemsky’s beauty and talent when he visited the set of Au Hasard Balthazar. She wrote to him in June 1966, saying that she loved him because of his films, to which he responded immediately by driving from Paris to Montfrin, near Avignon, to meet her. So began a romantic courtship, although their affair, with its 17-year age gap, started in earnest only when Wiazemsky subsequently enrolled at Nanterre University to study philosophy.

In the apartment they shared in the rue de Miromesnil in Paris, Godard made one of his greatest films, La Chinoise, about a radical Maoist cell. Wiazemsky found it a paranoia-inducing experience to be filming in the same space she shared with Godard, yet he revelled in the life-work set-up he had engineered and tapped directly into Wiazemsky’s seductively ambivalent personality to create the figure of the intellectual Véronique, who could also be impulsive and rebellious.

Like Véronique, Wiazemsky was a privileged child of the high bourgeoisie. Born in Berlin into an aristocratic family (her father Yvan Wiazemsky, a diplomat, was a Russian prince who had emigrated to France following the Russian revolution), she and her younger brother, Pierre, (the future cartoonist Wiaz) enjoyed a nomadic life, in Rome, Caracas and Montevideo. Their mother, Claire, was the daughter of the celebrated Catholic novelist François Mauriac, at whose estate in Malagar, southwest France, the family spent summers.

Mauriac took care of Anne’s education after her father died when she was 15 and the two developed a tight bond and understanding on everything except religion – she abandoned the faith early in her childhood. He gave his blessing to her relationship with Godard, and their marriage in 1967 – she was 20 and legally a minor, he was recently divorced from Anna Karina .

Wiazemsky and Godard travelled the world together and she acted in his films, notably as Eve Democracy in One Plus One (also known as Sympathy for the Devil, 1968), featuring the Rolling Stones, as well as in the collective Dziga-Vertov Group films such as Vent d’Est (1969) and Tout Va Bien (1972). She also starred in Pier Paolo Pasolini ’s Teorema (1968), as a dutiful, upper-class daughter, Odetta, who suddenly goes off the rails when an anonymous visitor (Terence Stamp ) arrives one day and seduces her. Her relationship with Godard became strained, however, as he immersed himself ever more intently in militant politics, and petered out in the first years of the new decade, although they were not divorced until 1979.

Wiazemsky continued to act in art-house films by other avant-garde directors, including Marco Ferreri, Alain Tanner, Marcel Hanoun and Philippe Garrel, and in works by mainstream directors such as Pierre Granier-Deferre and Michel Deville. As the 1980s began she felt increasingly on the margins of the film industry, although she later co-wrote the script for Claire Denis ’s coming-of-age film set in 1960s France, US Go Home (1994), and also directed a number of well-regarded television documentaries.

It was her love of literature that allowed her gradually to reinvent herself, first as a writer of short stories, then as a novelist, with titles including Mon Beau Navire (1989), Marimé (1991) and Canines (1993). These were all concerned in different ways with the female condition and struggle for independence.

Other important works followed drawing on her personal experience and family history: Hymnes à l’Amour (1996) recounts the extramarital adventures of her parents, Une Poignée de Gens (1998), examines her Russian origins, and Jeune Fille (2007) revisits her experience of working with Bresson, who, she wrote, propositioned her on set. More recently, Une Année Studieuse (2012) and Un An Après (2015) chronicled her years with Godard with affection.

In her final years Wiazemsky led a quiet life in Paris with her cat and books. She retained to the end her girlish demeanour, free spirit and compassion.

What is the going rate for a home in... Co Leitrim?
Real news has value SUBSCRIBE