Sean Moncrieff: ‘I have a lifetime habit of being slightly too late for things’

When I listened to Microdisney in 1987, I was listening to me 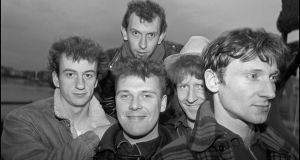 Microdisney: if the band had been a person, they would have been a bit arrogant, always sarcastic, well read, funny, cynical, sometimes pretentious, sometimes too smart-arsed; seemingly incapable of giving you a serious, straight answer. Photograph: David Corio/Redferns

The Ryanair Generation was arguably the first that didn’t regard emigration as a disaster. Because of the cheap flights, London didn’t seem so far away. Because of university education, these kids weren’t going to dig ditches and cry into their pints in Kilburn. This was an adventure; an escape from the repressive dump that was 1980s Ireland.

Due to a lifetime habit of being slightly too late for things, I didn’t arrive there until 1987. And among the first things I discovered was an Irish band. Well, sort of. Microdisney originated in Cork, but the vast majority of their music was made in London. They sang about being young and Irish in Britain, but everything else too. About life and death, and they did it with wit and anger but also a sudden, extraordinary tenderness.

Then they’d quickly change the subject. If Microdisney had been a person, they would have been a bit arrogant, always sarcastic, well read, funny, cynical, sometimes pretentious, sometimes too smart-arsed; seemingly incapable of giving you a serious, straight answer.

When I listened to Microdisney in 1987, I was listening to me.

Due to a lifetime habit of being slightly too late for things, I discovered them when they were just about to break up. And given the kind of band they were, they were never going to reform for a few bob and a greatest hits tour. Oh well.

But 31 years later, the National Concert Hall and Imro decided to give Microdisney an award. Miraculously, the band agreed to a one-off performance at the NCH in early June.

Due to a lifetime habit of being slightly too late for things, I never got tickets. And there was other stuff on. Life. Oh well.

Everyone said it was great, and I was left with the odd feeling of having missed out on a part of my own life. Me in London sounded like Microdisney.

Except this time there was a second, and better, chance. They were, after all, a London band and had agreed to another one-off show the following Saturday at the Barbican Centre. That’s where I went. On Aer Lingus.

It didn’t matter if it was terrible or extraordinary. (Luckily it was the latter). It was a pilgrimage, and it seemed that many of the audience were there for similar reasons. Many of them Irish – the Ryanair Generation that didn’t go home – men about my own age in colourful shirts and in various states of disintegration.

Afterwards, there was an enormous queue for the toilets. For all those middle-aged bladders, nearly two hours of music was a big ask. And while I queued I heard so many of them use the same two words: “30 years”, as if they’d just woken up to their lives.

Perhaps I’m reading too much into it, but it seemed then that being there (the concert; not the toilet), had somehow dredged up so much of what had happened to them, and me, in those intervening decades. All the sorrow and grins, the massive failures and tiny victories; the pain endured, the pain inflicted.

We describe time as linear, with one event after the other, but we don’t experience it that way. In any given moment our minds can be in the present, then years into the past, then wondering about the future. Everything mixed up, no matter how much we might want to escape it; still puzzled how to feel about most of it. Everything briefly distilled into one night in London.

Perhaps I’m reading too much into it, but even some of their songs anticipate this: ask how we’ll feel, endless years from now. Or at least it seems that way for me. Thirty-one years after it ended, I heard them perform: Goodbye it’s 1987.