It turns out, I am just a regular old Irish begrudger 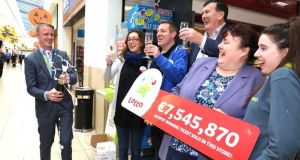 You hate them. Admit it.

Lottery jackpots have restored my faith in humanity but I have to confess they have confirmed, finally, what I have suspected for a long time about myself. I am a selfish, base, cynical, suspicious individual who is insanely obsessed with other people’s good fortune. How anyone could like me, let alone love me, is a mystery that shall never be solved.

I should have known; one of of my favourite television programmes as a child was Jeremy Beadle’s You’ve Been Framed which is essentially a way of getting joy from other people’s bad luck. Flip sides of the same coin. It’s probably why I’m so suited to journalism, devoid as I am it seems, of empathy and with a particular penchant for finding and processing information about other people’s bad luck. Their good fortune, on the other hand makes me uncomfortable and lets my bad side shine brightly.

It turns out, I am just a regular old Irish begrudger

Steven Patrick Morrissey once wrote that we hate it when our friends become successful, presumably modestly referencing his perception of other people’s perception of him. Like Morrissey’s detractors, it turns out, I am just a regular old Irish begrudger.

But lottery success in particular brings out the worst in me while at the same time bringing out the best in others. There have been a few very large lottery wins over the last while, most recently a syndicate from a hardware shop in Thurles, Co Tipperary, who took away north of €500,000 each in a recent EuroMillions draw; a princely sum for which you could buy up the entirety of Liberty Square or, if you preferred, a terraced fixer-upper in the Liberties.

There was an outpouring of joy and Eileen Dunne sort of smiled as she introduced the report on it on the Six One. It was “great news for Thurles” according to one person who was vox-popped by the posse of reporters that headed to Tipp for comment. At the shop itself, Stakelum’s hardware, staff who were not part of the syndicate were delighted for those who were, the atmosphere in the place was “electric”, there “wasn’t a bad word to be said” and there certainly wasn’t even an ounce of begrudgery to be found in the place. Those who were in the syndicate “deserved to win it”, said one man just before he checked in the back to see if there were any more of those bronze-coloured sledgehammers left they had on sale last week.

These are good people, who have room in their hearts for other people’s joy. Someone clearly pulled down the shutters on mine before I was born even though I’m told wishing positive thoughts on others can only make you a better person or even help you live longer. I’m trying, but I fear my early demise.

The shop owners who sell the tickets even seem to get great joy out of having done so. I’d be like “if only I had taken that winning ticket for myself and given them another one”, I’d be the one picking out colours and soft furnishings for that derelict crack house in Ranelagh. Me. My jackpot. I start dreaming about what I would do with the cash and I have to switch off the telly and wonder what made me not walk into that shop and buy that ticket.

The same questions go round and round my head. Would you give up your job? Would you tell anybody? Is more than €10 million too much? Are you in the lottery syndicate at work? Should I get the shop assistant to check my tickets? The answers for me are most definitely, most definitely not, most definitely not, yes but can I enter more than once using pseudonyms? And absolutely never; I mean the temptation to dispose of the “losing” ticket would be too great.

I have, meanwhile, been taking comfort in a 1978 study about lottery winning and whether or not it makes a person happy. The study carried out at Northwestern University in 1978 notes that “eventually the thrill of winning the lottery will itself wear off” and that “as lottery winners become accustomed to the additional pleasures made possible by their new wealth, these pleasures should be experienced as less intense and should no longer contribute very much to their general level of happiness”. This helps.

And for the purposes of sanity, I have adopted some golden rules. I will never (again) forget to enter the syndicate at work and will never give a scratch card or lottery ticket as a present to somebody I know. Because, worse than hoping and then not winning vast sums of cash in pursuit of eternal happiness, the thought of somebody else winning it instead could be too much to take.