‘I have one boob and I’m bald, so what’s your excuse?’ 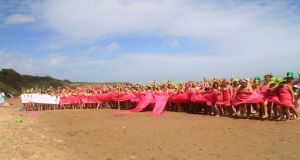 1,350 naked women are gathering in Wicklow

When Dee Featherstone was diagnosed with breast cancer, in 2012, hers wasn’t what one might call a normal cancer journey. “Everyone thinks they’ll find a big lump, but I didn’t,” she says. “I had a really small lump on my nipple and put it down to breastfeeding two kids. It’s only when I bumped into something that I’d think, Oh, wow, that’s sore.”

Despite this it took another illness, a stomach problem, to prompt her into getting it addressed by a medic. “I was in the hospital with the tummy thing and I thought, Well, I’m here for a few days,” she says. “I had a nurse look at it, and then the doctor came in with his team to check me the next day. I knew from the look on his face that something was wrong.”

Within days the CT scan and biopsies had shown an aggressive tumour that had spread to the lymph nodes. Featherstone started six months of chemotherapy immediately, to be followed later by a mastectomy, radiotherapy and reconstructive surgery.

I had a big chemo party where I took off my wig and threw it into the crowd. I was trying to take the scariness out of it for everyone

Determined to face her illness with grace and humour, she started a blog, kickingtheshiteoutofcancer.com. “I had a big chemo party where I took off my wig and threw it into the crowd,” she says, smiling. “I was trying to take the scariness out of it for everyone.”

Naturally, there were plenty of dark moments. “Without the girls and my husband I’d probably not have gotten out of bed,” she says. “The toughest part was when my hair fell out. I had a long ponytail, and it basically came off in my hand. And my eyelashes, eyebrows and toenails fell out. No one tells you about that bit.

“The chemo cycle was three weeks. Week one was like having the worst hangover ever, every day for a week; then you had to stay away from people in week two, because even a rise in your temperature would mean being back in hospital; and week three was just getting back on top of things. It got pretty rough towards the end.”

Featherstone decided to raise money for cancer research and awareness, and decided to schedule a charity skinny dip on a Co Wicklow beach, six weeks after her mastectomy. “I contacted some friends and family . . . and told them, ‘I only have one boob and I’m bald, so what’s your excuse?’ Sixty of us did the first one, and last year’s event grew to 200 women.”

Now in its sixth year, and with €153,000 raised so far, Featherstone’s annual skinny dip – raising money for Aoibheann’s Pink Tie, a children’s cancer charity – has a Guinness world record in its crosshairs today.

So far this year 1,350 women have registered to participate. Among them is Siobhán Harold, from Clane, Co Kildare, who is stripping and swimming in memory of her sisters, Bernie and Janet, who died of cancer within five months of each other last year. Bernie, who was 52, had fought the disease for eight years; Janet, who was 59, and lived in Australia, died within days of telling her family she had been diagnosed with liver cancer. “The two of them will be up there having a good laugh at me!” Harold says.

Of the experience of losing her siblings in quick succession, she adds: “It’s a horrible journey. You expect your mam and dad to go before you, and my mam had passed a year previously. But knowing that my sister was going, and that it was inevitable, it’s a strange kind of grief. We grew up together, shared a lot together. There are conversations you have with them that you just won’t have with your parents.”

This will be her first skinny dip for the charity. “I imagine I’ll feel emotional looking at the fantastically brave women,” she says. “Hopefully all of the women there will be surviving the disease. I’ll be a blubbering wreck that my sister isn’t here with me, but it puts my life into perspective. I’m still here, and I’m so privileged to be here.”

One woman told me that her husband hadn’t seen her naked in years. After the skinny dip she just walks around the house naked now

The skinny dip is open to women cancer patients and survivors, and to women who have been otherwise affected by cancer. “It’s basically giving a big ‘feck you’ to cancer,” Featherstone says. “For those who have cancer, they’re taking ownership of their bodies again. I think a lot of people initially go, ‘Oh my God, what have I let myself in for?” she says, laughing. “The first time I did it I just shouted, ‘Get them off,’ and everyone took off their gowns and ran to the sea. We fell about laughing, and did the hokey-cokey and sang Always Look on the Bright Side of Life naked . . .

“A lot of women said that the experience really changed their lives. One woman told me that her husband hadn’t seen her naked in years. After the skinny dip she just walks around the house naked now.

“Ironically enough, a lot of my daughter’s friends in their 20s would say, ‘Oh, God, I wouldn’t ever go naked,’ ” Featherstone says. “We rarely get women under 25 to sign up for it – even if they’re a size eight or 10 they seem to have more of an issue with their bodies than us oldies, even though some of us only have one or no boobs.”

More than anything she hopes to raise breast-health awareness among women of all ages. “Women need to be more vigilant and get themselves checked if something is amiss. I’d been told that had I left it six or seven months longer to get myself seen to, I wouldn’t have been quite so lucky.”