‘There is a sense of community and acceptance in Ireland’

New to the Parish: Henrique Peinado arrived from Brazil in 2006 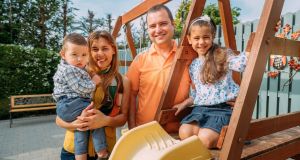 Henrique and Gislaine Peinado with their children Arthur and Victoria at home in Ennis, Co Clare. Photograph: Eamon Ward

When Henrique Peinado arrived in Ireland in July 2006 he did not enrol in an English language school. The 21-year-old only spoke basic English and knew there were plenty of colleges where he could join his Brazilian peers to improve his skills. However, he believed the best way to learn the language fluently was to dive straight in at the deep end.

“The plan was to find a job that would me push me to talk,” says Peinado, whose now speaks English with a strong Irish lilt to his accent. “I got a job in customer services where I had to speak Italian but it turned out customer calls in Italian were very rare. So I had to start answering the English language calls too. It was an international customer services office so we had calls from all over the world with so many different English accents. But for me it was the best school ever. In 30 days I improved my English more than years of classes.”

Peinado came to Europe in 2006 because of the lack of opportunities in Brazil. He had completed a degree in economics but was unable to find work in his home city of São Paulo.

“At that time I was living with my parents. I worked during the day and studied in the evenings but it was just enough to pay for some books and snacks. If I wanted to move out and start my life my salary would only cover the rent with a little bit left over. It wasn’t possible to live independently on that money.”

An only child, Peinado’s parents were initially upset when their son announced he was moving abroad. “My mum was crying for a week, it wasn’t easy for me either. My decision was hard for them but in the end they said ‘we respect you’. There was something inside me pushing to succeed in life and establish myself.”

Peinado’s maternal grandparents had come to Brazil from Italy while his paternal family originally came from Spain. “They were not afraid of moving but the generation of my parents was very settled. All my cousins are still in Brazil, I was the only one who said I want to do something different.”

In early July 2006 Peinado flew to France on his Italian passport where he stayed with friends for a couple of weeks. His plan was to find work in either France or Italy. However, his friends recommended moving to Ireland where they’d heard the economy was booming so Peinado booked a cheap Ryanair flight to Dublin.

Within three days of arriving, he found work on a building site in Gorey. He only lasted four weeks in the job but says that first month was filled with excitement for his new, independent life in Ireland. “Gorey was so different to São Paulo and not only in size. It was such a peaceful place. I was starting my new life and there was a sense of satisfaction in working in a different country. Even though the town was small it was beautiful.”

Peinado then moved to Galway where he found a job with a Brazilian-run money transfer service. He enjoyed the work but realised he would never learn English and integrate if he continued to surround himself with Portuguese speakers. It was at this point he found the job in customer services in Clonakilty and moved to west Cork. However, he continued visiting Galway every weekend to spend time with a young Brazilian woman called Gislaine.

“She was like me, trying to succeed in life. Her father had moved to Ireland to work in a meat factory in Cavan and she followed him three years later. But she never lived with him, she found a job and started working straight away. That impressed me a lot – that when she was 20 she had moved from another country and worked hard like that.”

In November 2008 the couple were married in Ennistymon in Co Clare and shortly afterwards they moved to Ennis. “It was a bit of a surprise for my parents. They thought I was moving very fast but they also saw I was living here by myself and said ‘okay, he knows what he’s doing’.”

The couple now have two children – Victoria (6) and Arthur (1). They purposely gave their children names that friends and family on both sides of the Atlantic could pronounce. Peinado speaks Portuguese to his daughter but she always responds in English. “It’s funny because when she speaks Portuguese she has a strong Irish accent. Her mother tongue is English and she prefers to speak English.”

He recalls a recent occasion when he felt real pride in his young daughter’s multi-linguistic abilities. “I was driving and she had her friend in the back seat. Suddenly they started talking and they were not speaking English or Portuguese, it was Irish. That made me very proud, she’s a proper Irish girl.”

Peinado says he and Gislaine are happy living in Ennis. “There’s a sense of community and acceptance here. There are lots of people from other countries in the town and we get on well with the Irish community. It’s not a small place but it’s not big either. We have everything we need and we’re close to Limerick and Galway.”

Peinado admits to sometimes feeling uncomfortable at living so far from a hospital in case of an emergency. “If there’s a problem we need to go to Limerick. When I was in São Paulo if you had an emergency you knew that within 30 minutes you’d be in the ER. The hospital is Ennis is not 24 hours and that bothers me a bit.”

The couple also find living so far from family difficult. “We have friends here and they give us support but it’s not like family. That’s what we miss a lot. Gislaine has her father living in Cavan but that’s still three hours’ driving so we don’t see each other that often.”

Peinado is planning to apply for Irish citizenship later this year while his wife was awarded citizenship in 2014. “We feel no urge to go back to Brazil, especially because of its economic and society problems. My children have their friends in school here, my daughter speaks English better than Portuguese. Ireland is home, there’s no reason to move elsewhere.”

Sorcha Pollak’s book based on this series, New to the Parish: Stories of Love War and Adventure from Ireland’s Immigrants, is out now.