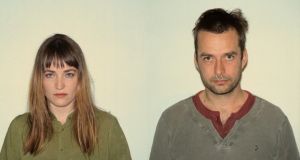 Radie: A tire blew on the motorway in Texas once and we all thought we were done for.

Ian: There’s been a few situations when I’ve been driving the van on tour where I’ve pulled a stupidly dangerous move. You have to get up at four in the morning to get to an afternoon gig on two hours sleep and overtake a car on a blind corner or something stupid. You look back on it like, “ah here”, waking up in the middle of the night with palpitations.

Is there any artist you feel very connected to right now?

Ian: The greatest hero in the country is Blindboy Boatclub. He’s so on point with everything he comes out with. He’s a really important voice in the country right now. I’m so impressed with his intelligence.

Radie: I’m listening to loads of Townes Van Zandt. I’m really feeling that at the moment.

What do you think is the best television show of all time?

Ian: I’m obsessed with Game Of Thrones. I’ve read all the books and watched the series around three times. The scope and breadth of the entire world blows me away. It’s up there with Tolkien.

Radie: I loved The Sopranos, but Carnivale, which had two seasons, set during the Great Depression in a travelling circus is visually amazing. I loved the story and its dark, ominous, amazing soundtrack.

Ian: I cry at nearly every single film I watch. You know the bit in The Snapper where they pretend they got the young fella a really crap bike for his birthday? And then they give him a good one? I cry at that bit. I also once cried explaining the plot of the Lion King to someone at a party.

Radie: Music makes me cry. I was at an event recently to do with dockers and the docklands. Lisa O’Neill performed a song from the point of view of a docker. A few dockers there started tearing up. It was intense, lovely.

Ian: An Iron Maiden T-shirt that I still have. I got it when I was 15. It used to be long-sleeve, and had a print on the front from Powerslave, but the print wore off so I sewed another Iron Maiden patch on to it. I still have it. I find it hard to get rid of things once I become attached to them.

Radie: Probably any of my pairs of flares from Harlequin [Dublin vintage shop].

Radie: I’d be upset if you told me I had to give up cheese, so I’d say a cheeseboard.

Ian: I had a taste of someone else’s banoffee pie recently. It was pretty amazing.

Ian: There’s a book by a fella called Graham Hancock called Supernatural, and the core of the book is examining prehistoric cave paintings and looking at them in the context of artefacts of a shamanistic ritual. He ties in a lot of other stuff; DMT [psychedelic drug], ayahuasca, fairies, aliens, the whole lot. He gets far out towards the end of it, but he throws up some very interesting hypotheses that I’m quite compelled by.

Radie: Musicophilia by Oliver Sacks. Also, this really exhaustive biography of Lola Montez who was an Irish femme fatale and con woman in the 18th century. It’s a fascinating story. She was a total chancer.

If you could introduce one Government policy tomorrow, what would it be?

Radie: A maximum wage instead of a minimum wage.

Ian: Universal wage and housing as a right.

Do you have a motto or mantra when things are getting tough?

Ian: I just remind myself how lucky I am. I’m living in the top five per cent of the world’s population. I have a son who is 10 years-old and healthy.

Radie: I fluctuate between giving out to myself, but I enjoy zooming the lens out and thinking how insignificant all of us are in the grand scheme of things. It doesn’t really matter if you f*** anything up!

Radie: Inis Oirr, but not at peak tourist season. It feels away from everywhere.

Ian: Glencolmcille in southwest Donegal. There’s a different energy about the place, it’s got its own microclimate, surrounded by three mountains and the sea. It’s a beautiful, quiet, gentle place.

What flaw do you most tolerate in other people?

Radie: Flakiness. I’m really flakey, so who am I to be giving out about that!

Ian: Anger. I know a lot of people who have short fuses. People say things that they don’t mean, so just be patient with people.

What two things do you need for a good house party?

Ian: Sound people and good tunes. All the other things are variables.

Radie: You’re right about the tunes.

Radie: And maybe a few cans.

Ian: The third thing is cans.

What do you owe a parent?

Radie: My parents always saw creativity as something worthwhile. They encouraged me and my siblings to go down that route. I owe them a huge thank you.

Ian: I have to credit my parents tolerating me being a total weirdo from a very early age. They went through hardship with me growing up, so I have to hand it to them.

What is the best thing about where you’re from?

Radie: The amount of free live music in Dublin and the standard of it is amazing.

Ian: I can’t believe how sound people from Dublin are sometimes. Every road you go down has a story about it. The place is steeped in history. I couldn’t imagine living anywhere else.

Lynch and Peat are members of the band Lankum, touring Ireland in June. lankumdublin.com