Avoid jokes about the groom’s sex life and tuck in the shirt, for starters? 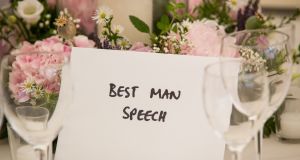 “A bad, cringeworthy or embarrassing best man’s speech is possibly the most uncomfortable thing to witness as a guest.”

Summer is here and the wedding invitations are rolling in thick and fast. I seem to get an increasing amount of them as the years go by, an unwanted reminder that I am now closer to 30 than to 20.

That said, I’m not quite the seasoned guest I’d like to be. There seems to be some sort of intrinsic knowledge of wedding etiquette held by the generation above me.

Why is it bad luck to wear black? Why is it rude to wear white? How much should I put in a card? Can I skip the Mass?

Deciding who to invite – or more divisive again, who not to invite – is a thought which would almost put me off the idea of marriage altogether.

Guests can span past the 300 mark at weddings down the country, and the bride and groom might not even know all their names.

One thing I think I’m pretty good at is recognising a good speech. Or, rather, a horrifically bad one

I’ve always assumed this happens because there is a mammy somewhere rolling out this kind of talk:

“Well ya can’t go down Boherbreen and not include the Tanseys too. And if you’re that far down the road aren’t you as well go up as far as O’Hara’s turn?

“And don’t tell me you haven’t put down the Mitchells? They were very good to your father when he lost those cattle in 2012. I couldn’t look them in the eye if you didn’t ask them.”

It is a rocky road of potential disasters, but one thing I think I’m pretty good at is recognising a good speech. Or, rather, a horrifically bad one – and I’ve seen a few dodgy ones in my time.

A bad, cringeworthy or embarrassing best man’s speech is possibly the most uncomfortable thing to witness as a guest. I’d rather see soup spilled on the bride’s gown, or fish handed to a vegan guest. But a bad speech? It doesn’t get worse than that.

My palms get sweaty, my goes mouth dry; my mind screams no-no-no. I am always on edge, anticipating the worst and hoping for the best. It is usually either my favourite part or worst memory from a wedding. Either way, it doesn’t leave my mind for weeks.

Holding a pint of Heineken

You know him to see, too, a man about to deliver a bad best man’s speech. He’s holding a pint of Heineken, half of it already slobbered down his waistcoat – the suit jacket is well lost at this point.

He might have an eyebrow ring, and smokes Benson. He probably broke speed limits in several counties while driving the groomsmen to the hotel in his electric blue Subaru Impreza.

He does doughnuts in it outside Knock airport on Friday nights and knows all the words to Marty Mone’s Hit the Diff.

That guy? That guy is the worst offender when it comes to speeches. There’ll be dirty jokes about the bride’s sex life; maybe even the mother-of-the-bride too.

There’ll be an allusion to past infidelities, and another “joke” about the groom’s sexual prowess – or lack of. It will contain lots of cursing and few compliments. It will make you despair the humanity of our youth.

Some speeches, however, walk the tightrope of humour and offence clumsily, while still managing to stay standing.

I was once at the wedding of a man who bought and sold cars from his home. A real wheeler-dealer. He probably fixed lawnmowers too, and had a few burner phones.

One of a series of anecdotes the best man told involved a phonecall the groom had with a potential customer in the GAA club changing rooms after training one night.

The groom took a call from someone who was interested in one of the “honest cars” he had advertised on DoneDeal.

“Your man goes, ‘how many miles are on it?’” the best man explained.

Queue the slightly nervous laughter of a crowd not sure if it was okay to laugh at the fraudulent car-clocking behaviour of a man at his own wedding.

Talk about tightrope walking! It worked, though. Sure who doesn’t clock the odd car themselves anyways? No biggie. Well worth it for the punchline.

The truly great best man speeches balance sentiment with satire almost equally. They are carefully titrated so as to elicit the most laughter as possible without properly offending anyone.

It should be full of embarrassing anecdotes and warm appreciation.

By the end, you shouldn’t know if your tears are from happiness or laughter. Nor should you know anything about anyone’s sex life.

And tuck in the shirt, will ya?