Tomatoes: To skin or not to skin?

Tomato skins are normally removed because of their taste and texture, or if you’re making a sauce 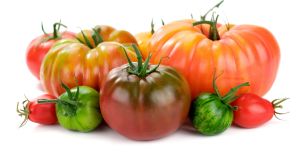 You haven’t tried a real tomato until you’ve had an organic heirloom tomato.

To skin or not to skin, that is the question. With game season fast approaching, you may think I’m talking about rabbits or deer, but in truth, it is tomatoes that occupy my thoughts on this wet August morning.

But seriously, do you have to peel a tomato? It seems it’s a yes and a no answer. The decision very much depends on how you’re going to use the tomatoes. And when I say tomato I’m not talking about those red plastic anaemic ones that litter the summer shelves. I’m talking heirloom or heritage ones, the kinds you find in farmers’ markets, the kind that are yellow, green, black and sometimes red.

If you haven’t tasted a heirloom tomato then you’ve as good as not tasted a tomato. Those red rubber ones were invented sometime in the 1930s to look like a tomato and still hold their shape after a week or two in the fridge.

But back to skinning. The skins are normally removed for two reasons: taste and texture. You can argue that if neither bother you, then the act of skinning can be ignored, except for one reason: if you’re making a sauce. Well, there’s even an exception to that rule. If you don’t mind your sauce not being silky smooth, then don’t bother. Another reason for not doing any skinning, is that the skins are full of fibre.

Fry one diced onion and one clove of garlic in a little oil. Add 200g of barley and stir so the barley is coated by the onions and oil. Add 250ml of cider and bring to the boil. After five minutes, add 300ml of tomato passata. Simmer until the barley is soft. You may need a little more stock. Fold in 50g of cubed cold butter before serving.

Half some heirloom tomatoes and sprinkle with salt, sugar, oil and fresh thyme. Roast for 10 minutes. Serve on top of the risotto or fold them through. Finish the risotto with your favourite Irish hard cheese; mine is Cáis na Tíre.