JP McMahon: This white fish can be found in five Irish lakes, including Lough Neagh 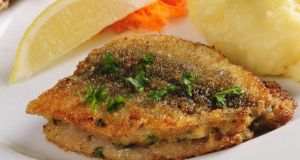 Pollan can be grilled or pickled as with herring, or fried with a crispy layer of breadcrumbs. Photograph: iStock

There are not too many fish that can only be found in Ireland. Pollan, rarely eaten in Ireland nowadays, is only found in five lakes in Ireland: Lough Neagh, lower Lough Erne, Lough Ree, Lough Derg, and Lough Allen. Though a descendant of an Alaskan-Siberian whitefish species (Coregonus autumnalis) that made its way to Ireland around 15,000 years ago, it is now unique to our island.

It’s an awful pity we don’t celebrate it more. In 2018, Lough Neagh pollan was awarded special status as Protected Designation of Origin (PDO) by the European Commission. As with salmon, eel and trout, pollan is one of the first Irish fish that was eaten by the earliest inhabitants of the island.

Pollan most likely entered the Shannon (the longest river in Ireland) at the end of the last Ice Age and spread to the five loughs, all of which were interconnected at the time. Lough Neagh is the only lake where pollan are fished for commercial purposes.

In Lough Neagh, pollan, often described as a freshwater herring, has been fished for thousands of years. Fishermen would either fry it fresh or scale, gut and dry it, so as to use it at a later date.

The typical way of frying the pollan was to gut and wash them and then roll in flour seasoned with salt and pepper. Nowadays, most pollan is exported to Europe, particularly Switzerland. Gannet fishmongers now stock it and can ship it nationwide.

How to cook fried pollan with black pepper mayonnaise

Pollan can be grilled or pickled as with herring, but I like to butterfly it and dredge it in flour, egg and breadcrumbs. I prefer to use panko, the Japanese breadcrumbs, as they make the fish extra crispy.

Fry the fish in a little butter and oil on both sides and serve with a nice mayonnaise laced with black pepper.

How can we best manage our children’s screen time?
7

Pyramid or plate, carbs or veggies: What really is the ideal diet?
8