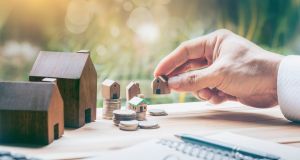 I waited and waited for the nesting instinct to kick in during pregnancy, but it never came. I hoped that some sort of hormonal mutiny would somehow happen, motivating me to get round to this DIY job and that clearout, but no. As big as a house and moving with the gait of molasses, I sat back and lived my final few non-parent days gorging on Netflix.

Nesting. What a spoof.

Well, it’s properly kicked in now. Like an itch I can’t get at, I’m desperate to have a house with enough room for the three of us. A place where my daughter can have her own bedroom and somewhere to stash her considerable load of stuff.

Want to make God laugh? Tell him your plans. As in, your plans to buy a house in Ireland, when you work freelance.

Is it so bad to want to be able to provide the same sort of home for my own child?

My partner – also a freelancer – and I were hopeful at the beginning of our house-hunting journey. Our broker was confident we would secure a mortgage easily enough, and in time, the home of our dreams. PAYE employees are offered multiples of their gross salary, but self-employed people are offered multiples of their post-tax, post-expenses net profit.

We started house-hunting in earnest with our freshly approved mortgage, attending viewing after viewing on weekends. Lugging buggies up stairwells, and taking buses to far reaches of the commuter belt. Bidding wars on properties in desirable locations abounded, despite Brexit-related rumours that house prices were due a tumble. Bloodied but unbowed, we widened our search. And then a pandemic changed everything.

Our broker got in touch with a revised, post-Covid amount that our potential lender was now willing to offer us. I won’t get into the specifics, but here are the descriptions of some properties that our new budget will buy us: a two-bedroom apartment in Rathcoole. A 60sq m terraced house in Balbriggan. A three-bed house in Dublin 15, that doesn’t have a roof on it. There is one property in our price range in the part of Kildare we hoped to buy in. It’s smaller than the house we rent now. Curiously, the mortgage repayment on it works out at about half of what we pay in rent, but ho-hum. Banks have rules. They’re not about to stretch them now, even if you do seem like a pretty decent candidate on paper.

Don’t get me wrong; there’s absolutely nothing wrong with a home that size, or indeed in any of those areas. But wanting to live in a certain area, and in a house with a third bedroom, is simply out of reach right now. As a second-time buyer (with an apartment bought in boomier times that flat-out refuses to move out of negative equity), we don’t get to benefit from any of the sweeteners for first-time buyers.

I grew up in a three-bedroom, semi-detached house in Blanchardstown. It was no-one’s idea of a financially privileged upbringing.

Is it so bad to want to be able to provide the same sort of home for my own child? Seemingly so. Despite making more money now than my parents made when I was a child, I could not afford to buy the house I was born in.

My dad recently dropped quite the bombshell. When my parents bought their house in Blanchardstown when I was born in the 70s, they then stayed in their flat on Portobello’s Harrington Street, for well over a year. At 26, they paid both a mortgage and rent until I was born, at which point they had just about gotten around to buying a washing machine and fridge. Still, the arrangement seems inconceivably profligate to me, a woman in her 40s.

My parents weren’t the lucky benefactors of a tidy inheritance or anything like it. But can you imagine any young couple able to afford to leave a newly purchased, turnkey property lying empty for over a year?

Property affordability isn’t just a problem twentysomethings face. I know people in their 40s living at home with their parents or in-laws in a bid to claw together a sizeable deposit. I know people nearing 50 who worry they’re going to be too old to even secure a mortgage in the first place. Most people I know who are lucky to live in a house bigger than the one they grew up in either got extremely lucky, or shrewdly married for money.

This hasn’t anything to do with being the swallow who spent all summer. Yet being hard working, a good saver or prudent doesn’t get you much closer to home ownership either.

I know dentists, doctors and several “good on paper” professionals who are struggling to get a foothold on the property ladder. Several of them don’t live alone, and have housemates.

The fact is, there are people of a certain age, with a comfortable toehold on the property ladder, who will never understand or be able to empathise fully with the ongoing plight of the rest of us looking for a place to call home. It’s likely to create a two-tier system of property owners; those who were lucky or wily enough to buy property before things went haywire, and the rest of us.

In the meantime, my partner and I will keep paying (consistently, and without too much trouble) the sort of rent that, were it turned into a mortgage payment, would buy us a very comfortable home indeed. Maybe one day the powers that be will recognise the eternal plight of the freelancer. But I very much doubt it.