New to the Parish: Shubhangi Karmakar arrived from India via the UK in 2015 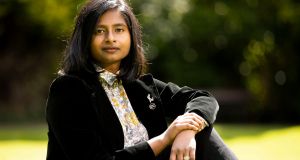 Shubhangi Karmakar: ‘I suppose it’s the curse of every Irish person that the best talent has to end up being immigrant talent. You need to go away and learn and then bring back your skills.’ Photograph: Tom Honan

When asked where she’s from, Shubhangi Karmakar’s answer is far from simple. When I emailed her this question before our interview, she replied that she was born in India, grew up around Europe and moved to Ireland five years ago. It’s probably much easier if I explain in person, she wrote. “It’s been a colourful, bleak and funny story.”

The 23-year-old medical student currently lives in Terenure, a far cry from the Indian city of Chandigarh near the foothills of the Himalayas where she spent the first few years of her life. The daughter of a doctor and a food technologist who often travelled for work, Karmakar was brought up by her aunt during those early years.

When she was about seven her family relocated to Vienna for her father’s job. Here Karmakar attended a public school made up almost entirely of migrant or refugee students. After a few years in Austria, the family briefly returned to India before moving again to England. She still recalls her late aunt’s sadness when the family left a second time.

“I remember this person who had raised me saying please don’t go, there’s nothing for me here without you. I’ll never forget that moment.”

Karmakar spent her teen years at a grammar school in Cheshire in northwest England. Having learned English from an American teacher in Austria, Karmakar spoke the language with a distinctively Ohio accent. “It was a very difficult place for me to arrive into with my Indian skin and Ohio accent. I was an ADHD bowl of nervous energy who exploded into this incredibly white, incredibly privileged space.”

Life in England was not easy for the young Indian student, and Karmakar’s school offered no support when she started suffering from mental health issues. “There were people who would bully you until you hurt yourself or bully you for hurting yourself. I was left in a severe state of social isolation.”

When Karmakar’s parents suggested she move abroad for university, the young student started investigating medicine at Trinity. While her first choice was to study law in London, she knew there was an expectation she should follow a similar path to her mother. She was also intrigued by Ireland; a country that regularly featured in the UK news during Karmakar’s final year of school.

I’ve found such ties in this community that I cannot imagine not coming back here. I don’t see a future that doesn’t have Ireland at its heart

“It was the time of the marriage equality referendum and I had this incredible teacher from Ireland who made us study Irish poetry and politics. I heard so much about Ireland’s history from her and about how quickly the country was evolving.”

However, Karmakar did not really like Dublin during her first visit to sit the HPAT medical exams. “I remember wandering around with my father and wondering, is this all there is? Is this what they call a capital city?”

Despite these initial hesitations, she arrived in Dublin in autumn 2015. Having lived a very sheltered home life, where she did not even own a mobile phone, being in a foreign city alone was a huge challenge.

The young student struggled to make friends and relate to her classmates in medicine. “I’ve travelled around so much I find it very difficult to form long, permanent bonds with people. But I’m very lucky that I did find my two best friends here. They are the people who have seen me living off €2 a day and given me a home when I needed it. It’s such a privilege to even be a small part of their lives.”

After her second year of university, Karmakar opted to study for a master’s in molecular medicine before returning to her medical studies. She had just started a placement on Arranmore in Co Donegal when the country started going into lockdown in March of this year.

“I had gone from being in the melting pot of the city centre to speaking my Irish for the first time with a lovely octogenarian gentleman in a pub on Arranmore. Suddenly I was going back to the city to live in an attic for however many weeks of lockdown and that really jarred with me.”

Upon arrival back in Dublin, Karmakar contacted former Fine Gael TD and pharmacist Kate O’Connell, whom she had gotten to know during the Repeal campaign. “I felt so dispossessed from the practice of medicine so I contacted Kate to ask if I could offer some help.”

Karmakar started delivering medication to patients unable to leave their homes because of coronavirus and then started food deliveries to members of her local community in Terenure.

“I don’t know when exactly it happened but very soon this sea of strangers became a group of familiar faces. This was an opportunity to take joy not from curing people but from connecting and giving support. I’d never had that community in the city centre.”

These new friendships became a lifeline for Karmakar, not only during the pandemic, but also a vital element of her ongoing recovery from an incident earlier this year.

In January, she was assaulted and racially abused while walking home from work at the Coombe Hospital. She temporarily suffered hearing loss and had to take time off work.

Her newly discovered Terenure community became “a salve of healing for me” and has “given me hope for where to move forward from here”, she says. “I finally feel like I’ve become part of the fabric of a community that really uplifts you. Being in lockdown had made me take stock of the people around me and the relationships I’ve formed.”

During her five years in this country Karmakar has achieved a long list of accolades including editing the Trinity Student Scientific Review, becoming a spokeswoman for gender, disability and ethnic diversity in academia, and receiving a nomination for woman of the year by the Lord Mayor of Dublin for her advocacy work and scientific research.

However, the events of recent months, and the friendships she has developed as a result, are what really ties her to this country now.

She plans to spend time working in the UK but ultimately wants to build a medical career in Ireland. “I suppose it’s the curse of every Irish person that the best talent has to end up being immigrant talent. You need to go away and learn and then bring back your skills.

“I’ve found such ties in this community that I cannot imagine not coming back here. I don’t see a future that doesn’t have Ireland at its heart.”