Seán Moncrieff: Welcome to the death of satire 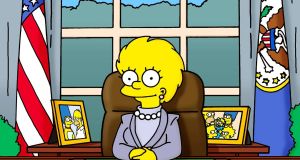 Lisa Simpson as US president. On her first day, she informs her new cabinet that they may have to raise taxes due to a fiscal hole left by her predecessor, President Trump.

Back in the year 2000 – a far more innocent time – an episode of The Simpsons projected a future where Lisa Simpson becomes the US president. On her first day, she informs her new cabinet that they may have to raise taxes due to a fiscal hole left by her predecessor, President Trump. Eighteen years ago, this was wonderful satire on turn-of-the-century America. Today it is fact. Welcome to the future. Welcome to the death of satire.

It’s an article of faith, particularly among lefty types, that we need satire. It is a form of resistance, a changer of hearts and minds that can have real-world effects. It’s been argued that the British satire boom of the 1960s – the birth of Private Eye magazine and Peter Cook’s jazz/comedy club The Establishment – permanently changed the way the British public viewed their political betters, a tradition that continued on into the 1980s when Spitting Image joyfully eviscerated politicians. David Steel, the then leader of the Liberal Party, was presented as a squeaking, goblin figure in homo-erotic thrall to the leader of the Social Democratic Party, David Owen. Many people, including Steel’s wife, said it ruined his career.

If all that is true, then satire in 2019 has become functionally impossible. For satire to work, there has to an element of exaggeration: to reveal the secretly grotesque. Steel’s grovelling to Owen was because their two parties had an electoral pact. In 2000, the idea of a Trump presidency was ludicrous, but reflected how celebrity-obsessed American politics was becoming.

Today, we are on the other side of the looking glass. It’s impossible to satirise politics because politics is satire. Just before Christmas, Trump was filmed asking a seven-year-old boy if he believed in Santa Claus. Five years ago, this would have been an article in the Onion: and when I first heard of the incident, my first reaction was that it must be a spoof. I had to remind myself that this was 2018 and that GUBU is the global norm.

And it’s quite deliberate. The likes of Trump and Boris Johnson revel in their buffoonery. For satire to work, there has to be an accepted set of norms; ways that politicians are expected to act. The satirist uses humour to expose their transgressions. But in the modern age, the transgression is the whole point: supporters of Trump and Johnson like the fact that they say the wrong thing, that they are undiplomatic, that they make stuff up and don’t know what they are doing. Stupidity is just one of the weapons deployed in the politics of destruction.

Of course, satirists still try, and you can’t blame them for that. Have I Got News For You still trundles along. There’s Last Week Tonight and The Daily Show in the US. Anything by Armando Iannucci is still brilliant. Yet it’s arguable that their effect is the opposite to what they may intend. Watching John Oliver isn’t going to make a Trump supporter change their mind: more likely, it would further deepen their view of smug, east coast liberal snowflakes, poking fun at ordinary people and their heroes. And for those who enjoy such shows, it’s little more than political therapy, comfort that there are lots of like-minded people.

But perhaps that’s what satire is really for, and what it was always for: a form of release. Entertainment in a dark time. Something that makes you laugh when you don’t feel like laughing. But it’s a mistake to believe it can change anything.

In 1961, on the opening night of The Establishment, Cook explained to the audience that he had modelled it on “those wonderful Berlin cabarets, which did so much to stop the rise of Hitler and prevent the outbreak of the second World War”.

What is a micro-cheat and are you one?
8