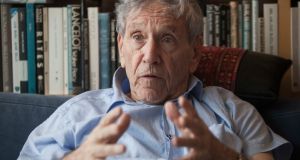 A child of European Jewry, the Israeli writer Amos Oz, who has died aged 79, became the father of a Hebrew literature where the personal and the public overlapped. Oz was prominent as a supporter of the Oslo peace accords of the 1990s and in the debates that followed. Although he was a frequent critic of Israeli politics, he was shamelessly in love with the newly emerging modern Hebrew. “I feel for the language‚” he said, “everything that perhaps I don’t feel for the country.”

Oz was born into a Jerusalem household bursting with failed literary and intellectual ambitions, chiefly those of his father. His parents had arrived from eastern Europe in Palestine in the mid-1930s, when the country was packed with a highly competitive, multilingual European Jewish intelligentsia. Oz’s upbringing was coloured by this hothouse of debate and the rebellions against the British at the end of the Mandate. He was also imbued with the heroic ideal of “the new Jew”.

Writing of this in detail in his 2004 autobiography, A Tale of Love and Darkness, he poignantly described the birth of the new Hebrew language and the modern Hebraic state of mind. He also showed how the Jewish culture of the enlightenment fizzled out in the 1930s and 1940s. If the Palestinian Jews were at war with the British, they were also at war with themselves.

Oz observed this political and personal Jewish trauma, which was to become the seedbed of his own writing career. The Yiddish mysticism and romantic melancholia of his mother, Fania (nee Mussman), collided with the European rationalism of his father, Yehuda Klausner. When his mother took her own life, Amos was 12, and it is the death of a rebellious woman locked into a sterile marriage that haunts his memoir. After his mother’s death, Amos Klausner changed his surname to Oz, the Hebrew word for strength.

Oz, witness to his parents’ failed marriage and to the failure of the European diaspora dream, did not belong to their internal landscape. Where they were Jews, he was an Israeli. Where they brought the values of the 19th century to Jerusalem, he adopted the values of the socialist kibbutz, as a tractor driver, security patrol and canteen worker. Where his parents were ill at ease in Hebrew, he was to become its champion. Where they were of the right and admired Vladimir Jabotinsky and Menachem Begin, he was the prince of the left and the Israeli NGO Peace Now.

He reinvented himself, discarding the stereotype of the ghetto Jew as a pale, urban weakling. Klausner became Oz, the rugged, outdoor, tough guy. He left Jerusalem for Kibbutz Hulda at the age of 15, by which time he had already decided to be a writer. When he was six he had posted a sign on his bedroom door – “Amos Klausner, author”. His early works in Hebrew publications included the story A Gift to Mother (1953) and a variety of poetry (1959). It was when his fiction was translated into English in 1969 that his international reputation was established.

Oz’s public image was not just that of a great Hebrew writer but that of an author-politician. He acknowledged that he was part of a “Judeo-Slavonic tradition” where writers are also expected to be prophets for their people. He longed for a two-state solution. “It will come, everyone knows it will come,” he told me in 2004. “The question is when.” Always recognising Palestinian desire for sovereignty, he asked: “Why can’t we just divorce like the Czechs and the Slovaks. Without blood?” In 2004 he published Help Us to Divorce.

During the hopeless period of the Lebanon war and the intifadas of the late 20th century, Israel needed voices that spoke to the outside world offering a more humanitarian face than that of Ariel Sharon. Oz and his contemporaries – the novelist AB Yehoshua and playwright Joshua Sobol – became Israel’s alternative spokesmen. They were the artist-politicians, much as Bertolt Brecht, Jean-Paul Sartre and George Orwell had been in the first part of the century. But, if Oz was fighting the bullish Sharon he was also the self-declared enemy of the orthodox and the fundamentalists.

Oz had a huge literary and personal following. Of all his artistic peers, he was the most photogenic and won admirers of all generations. Wounded in the 1967 and 1971 wars, he was Israel’s most beloved peacenik. At Kibbutz Hulda, where he lived for more than 30 years, he learned his socialist politics. His fellow kibbutzniks inspired many of the characters in his writing and, in return, his royalties went to the common budget.

His best known works are My Michael (1968), The Hill of Evil Counsel (1976), A Perfect Peace (1982), To Know a Woman (1989), Don’t Call It Night (1995), Black Box (1988) and The Same Sea (1999).But an Israeli novelist cannot escape the political crucible. One newspaper editorial criticised My Michael because “no nice Jewish girl would dream of falling in love with an Arab”. Even prime ministers telephoned Oz in the middle of the night to ask for his political advice. But, as Oz pointed out, “of course, they never took it”.

After leaving the kibbutz in 1986, Oz became professor of Hebrew literature at the Ben Gurion University of the Negev (1987-2005), living far from Jerusalem or Tel Aviv, at Arad, one of the driest places on earth. He was a visiting professor at Berkeley, Oxford, Boston and Princeton.

Oz was not only a novelist but also a provocative non-fiction writer. With In the Land of Israel (1983), he produced a striking collection of hard-hitting monologues by Jews and Arabs from wildly differing political standpoints. To many reading him in English translation, his non-fiction carried the greatest weight. Israel needed champions and it was in these direct narratives that Oz explored the complexity of a country so often depicted in the western press as a rogue state.

In 2012 he wrote Jews and Words, “a conversation” with his daughter Fania exploring language, Jewish culture and gender. Three years later came Natalie Portman’s movie of A Tale of Love and Darkness.

If his essays and political interventions were positively received, the often lyrical style of Oz’s novels had much less impact abroad. Either way, he was a bestseller in Israel, often topping sales of more than 10,000 copies a day.

In 1960 he married Nily Zuckerman. She survives him, along with their son, Daniel, and two daughters, Fania and Gallia.