When they are older, our kids may laugh about all the crap they used to watch online 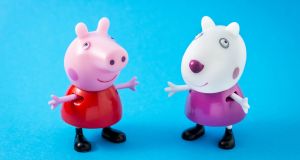 ‘If she wants to veg out in front of Peppa, she can get instant access to it.’ Photograph: iStock/Getty Images

Daughter number four doesn’t understand television. There are shows and films she likes to watch, but she has no conception where they come from. Her expectation is that if she wants to veg out in front of Peppa, she can get instant access to it. On the few occasions she has watched live television, she was baffled. She couldn’t understand why we couldn’t fast-forward through the adverts.

Her siblings are similarly minded. They watch Netflix or sundry influencers online. They record the occasional film. Apart from the Toy Show, they’ve never watched an episode of The Late Late Show.

They are pretty typical. They’ve grown up in a media environment where “television” – as their elders call it – has little meaning. They watch “content” on screens of various sizes. They are utterly indifferent to whether it comes through a server or a radio wave. They don’t care if it was produced down the road or thousands of miles away. It’s all the same to them.

When it comes to the media, it’s impossible to tell anything anymore; other than it feels like a slow death is taking place

When they are older, they may laugh about all the crap they used to watch. Or they may not. It’s impossible to tell. When it comes to the media, it’s impossible to tell anything anymore; other than it feels like a slow death is taking place. We’re seeing it in Ireland right now. In the week that Ireland’s greatest broadcaster died, the organisation that produced him was fighting for its life.

There are all the obvious reasons: competing independent content providers, both Irish and international; the internet hoovering up all the advertising; RTÉ itself, which is unwieldy and glacially slow to change, hamstrung by employee entitlements and Civil Service attitudes. The National Broadcaster is usually depicted as a monolithic organisation, but it’s more like the European Union, with various parts of the organisation often working against each other. Unanimous agreement can be tricky.

However, behind all this is a darker cultural change, one in which the need for public service broadcasting is being questioned. On social media, the perpetually outraged fume about having to pay a license fee or obsess about how much Ryan Tubridy gets paid. Politicians don’t want to be seen to be giving any more money to help an organisation that routinely gives them a hard time. Even those who want to help tend to view RTÉ only in relation to its coverage of politics. Young people are indifferent. People ask: what is Public Service Broadcasting anyway?

And nobody ever wants to praise RTÉ: no matter how many editions of The Young Offenders or Room to Improve or Prime Time Investigates it produces.

When it’s dead and gone, in our traditional Irish way, we’ll say it was great

As a country, we’ve largely moved past our national inferiority complex. Except, strangely, when it comes to RTÉ. It’s an easy target for our myriad resentments, as a way to express that traditional Irish self-hatred. It gets no love at all.

Like most public service broadcasters, RTÉ is staffed by editors, camera operators, sound engineers, directors, producers: people who have spent a career developing their craft. That’s been blown up in a decade by online influencers who don’t care about production values. Young people are flocking to watch content that, in traditional TV terms, is for the most part utter crap. How do you compete with that?

Yet RTÉ is expected to figure this out by itself; as if it is some national charity case. Everything it has contributed to Irish life is ignored.

All that is certain is that if things remain as they are, RTÉ will only exist in a vastly reduced state, or not at all. And when it’s dead and gone, in our traditional Irish way, we’ll say it was great.