Ross O’Carroll-Kelly: ‘I recognise the look instantly. One cheater knows another’ 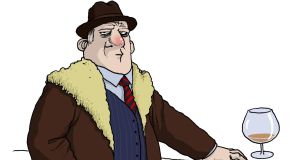 I open the front door and the old man is standing on the doorstep with a grin like a xylophone.

He goes, “There you are, Kicker! Sorry to tear you away from the lunchtime news. I expect you’ve been following the latest twists and turns in the efforts to form a new government? You’ve probably been contemplating it all day.”

I’m like, “No, I’ve been contemplating whether I should chance eating the leftovers of Saturday night’s sweet and sour pork for my breakfast, or would I then end up sitting on the bowl all day, watching videos of rugby swan dive fails on YouTube to pass the time. Like last Monday.”

I’m wondering is he going to tell me. The old dear was planning to – yeah, no – propose to him on Saturday night? What with it being the, apparently, 29th of February.

He’s like, “Er, yes, there is, as it happens ... Ross, your mother and I have some rather significant news. And we thought you, as our only son and heir to the family overdraft, should be the first to hear it.”

“Let me guess – Terroirs in Donnybrook have upgraded her loyalty cord to titanium?”

“Ross, your mother and I have decided to separate.”

“Yes,” he goes. “Sad news to have to import, Ross. But following much mature discussion and contemplation on the subject, Fionnuala and I have decided to ‘uncouple’ – I believe that’s the phrase that’s currently de rigueur – and proceed along the road of life as two separately taxable individuals.”

“Hang on,” I go, “she was supposedly proposing to you on Saturday night. Has she been drinking with her halitosis meds again?”

“Oh, no, she did propose, Ross. It was actually rather a lovely scene. She cooked her famous Nigella Lawson vanilla-and-harissa-spiked lamb, which is one of my favourites, as you know. She had the lights down low, candles, Il Divo on the CD player.”

“You must have puked, did you? I’m feeling a bit queasy myself.”

“At some point in the proceedings – it was just after dessert, as it happens – I went to the men’s room and returned to find your mother wearing nothing but some sexy lingerie and the Greg Norman replica straw Stetson that I bought when the great man played Mount Juliet in the summer of 1995.”

“Jesus, why would you want to put that image in my head?”

“She said, ‘Chorles, we made a terrible mistake getting divorced. I know you’re still technically married to that Helen person, but there’s nothing that says we have to wait until your divorce comes through before we get engaged. Chorles, I love you. I never stopped loving you. Will you marry me?’”

“I’m not sure I actually said anything, Ross.”

“I’m not surprised if she was sitting on top of you for that whole speech. You’re not a young man.”

“Let’s just say, she saw the doubt in my eyes, Kicker, and she withdrew her offer from the table there and then.”

“So you were going to say no?”

“Do you mind me asking why? What’s wrong with the woman – aport from the fact that she looks like someone has melted down Simon Cowell and force-fed him to Sharon Osborne through a funnel?”

“The reason I can’t marry your mother, Ross, is for, well, political reasons.”

'There’s no mystery as to where me and Ronan got it from. You’re unbelievable'

“What are you talking about?”

“New Republic – the porty of which I am president – is anti-divorce, Ross.”

“But you are divorced. So are half your TDs – the rest are cheating on their wives.”

“Our base, while conservative, is charitable enough to forgive the odd mistake in the old marriage morket. But if I were to divorce Helen and marry your mother, well, that would be my third trip up the aisle. I might stort to look like some sort of serial marryer – not to mention hypocrite. Hennessy is certainly of the view that it wouldn’t play well with the grassroots.”

“And that’s the reason you said no?”

“You’re not even a good liar. There’s something else. I can see it in your face.”

“Well, alright, if you must know, Ross, I haven’t quite decided yet if I want to be divorced from Helen.”

“Even though you’re back with the old dear.”

“It may come as a surprise to hear that your old dad is not made of granite. I am but flesh and blood. And, yes, I do still have feelings for Helen.”

“But when was the last time you even saw her?”

I see this look pass across his face and I recognise it instantly. One cheater knows another.

I’m there, “You’ve been seeing her again – behind the old dear’s back.”

“There’s no mystery as to where me and Ronan got it from. You’re unbelievable.”

And that’s when I happen to look down and I spot the suitcases at his feet.

He goes, “I just wondered would you and your good lady wife be prepared to, well, put me up for a short while – just until I figure where it is that my hort truly lies.”

'I shan’t stay long, Sorcha. A few weeks. Six months at the most'

“Need I remind you, Ross, that your mother and I put you up many times during difficult times in your own marriage. We still keep a room for you.”

“Well, unfortunately, we don’t have a room for you.”

“You have nine bedrooms, Ross.”

“They’re all being used.”

That’s when Sorcha appears in the hallway behind me.

She’s like, “Hi, Chorles! Ross, what’s your dad doing on the doorstep? Invite him in!”

I’m there, “I’m afraid we might not get rid of him, Sorcha.”

He goes, “Fionnuala and I are experiencing one or two painful paroxysms in our marriage, Sorcha. I was just looking for somewhere to lay my confused head for a few nights.”

She opens the door and invites him in.

And he’s like, “I shan’t stay long, Sorcha. A few weeks. Six months at the most.”