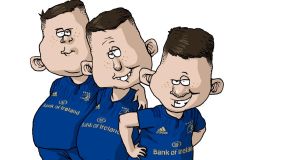 ‘Hugo is the new go-to name for parents who want their children to be mistaken for Protestants.’

She’s there, “I just had a phone call from the Montessori, telling me to come and collect Brian, Johnny and Leo.”

I sigh. It’s the only thing you can do when you’ve got kids like ours.

I’m there, “What have they done now?”

And Sorcha goes, “Why do you automatically assume it was something they did?”

“I can’t believe you would describe your own children as yobs.”

“Yeah, they were banned from the Disney Store last week for kicking the s**t out of Dumbo.”

“It was a giant stuffed toy, Ross. And I still say the only reason Brian attacked him was out of fear. Anyway, are you going to just stand there slandering them or are you going to come with me and be an actual advocate for our children?”

An actual advocate for our children? I knew it was a bad idea watching that Amal Clooney documentary on Netflix.

I decide to accompany her to Little Apples – if anything to try to talk her down during the course of the drive.

“I don’t like asking questions of us as parents,” I go when we’ve been in the cor for, like, five minutes, “but I wonder are we in any way responsible – even accidentally – for the way they’ve turned out?”

“I’m talking about us not correcting them when they use bad language. Or when they pull the ears off an innocent elephant. Or when they spit over the side of the escalators in Dundrum. ”

“I just think that, two years on, we need to maybe ask ourselves is that approach definitely working?”

She goes on the big-time defensive then. She’s like, “And where did our sons learn all of the disgusting words they know, Ross?”

“And where did Honor learn them?”

“You can’t say this is my fault just because I drop the occasional F-Bomb. If anyone’s to blame, it’s your old pair for buying them those Manchester Something Something soccer jerseys.”

“Okay, Ross, I don’t think you and I should fall out over this. I think we need to walk in there this morning and show a united front. I mean, our boys are far from the most badly behaved children in Little Apples Montessori.”

Then we sit there in silence for a good five minutes trying to think of a kid who’s worse.

Sorcha goes, “What about Hugo White?”

I’m there, “Is that Hugo whose old man is a portner in–?”

“Oh, is Hugo White the kid with the sticky-out–?”

“Right. Why is every second kid these days called Hugo, by the way?”

“It’s the new go-to name for parents who want their children to be mistaken for Protestants.”

“Makes sense, I suppose. And you’re saying this Hugo – whoever he is and whatever he’s done – is definitely at least as bad as our three.”

“That’s good. Well, at least we’ve got that to fall back on.”

If her kid pissed on the floor of the Vatican, she’d be looking for signs of genius in the splash patterns

We drive on in silence.

Then Sorcha goes, “I think the so-called teachers in this place have some questions to answer as well, don’t you?”

“The reason we sent our boys to Little Apples was because they claimed they could help discover their special gifts.”

“I’m wondering do they even have any, Sorcha. They seem pretty useless to me.”

“Of course they have gifts, Ross!”

Sorcha is one of those South Dublin mothers – if her kid pissed on the floor of the Vatican, she’d be looking for signs of genius in the splash patterns.

She goes, “We need to ask the school why, after however many months it’s been since they were enrolled, none of them are playing a musical instrument or producing a piece of ort that suggests genuine talent?”

She throws the Nissan Leaf into the cor pork, then I follow her – Sorcha O’Carroll-Clooney – into the school. She morches straight for the principal’s office, with me running beside her to try to keep up with the length of her stride.

She knocks on the door – three no-nonsense knocks – and Mrs Perezynski goes, “Come in!”

Which we then do.

Brian, Johnny and Leo are sitting next to each other at the far wall of the office, looking seriously shamefaced. They turn their eyes away when I look at them. I don’t know what they’ve been accused of doing but it’s obviously bad?

Mrs Perezynski stands up. She’s like, “Thank you both for coming in to see me this morning. I wanted to talk to you about–.”

But Sorcha cuts her off.

She’s like, “How about I talk and you listen for once? Because I am – oh my God – sick to death of receiving phone calls and letters from this school, offering me tittle-tattle about the things my boys have supposedly done. And while it’s too early for me to stort talking about solicitors, I would like to know how my children had the time to do this thing that you’re alleging they’ve done. Perhaps if you were spending actual time with them, helping them to discover who they are and what makes them unique as individuals, they wouldn’t have time for mischief. It’s teaching you’re supposed to be doing, not crowd control.”

Mrs Perezynski smiles at her patiently and goes, “Mrs O’Carroll-Kelly, I asked you here today because–.”

“Oh, this should be good!” Sorcha goes. “I can’t wait to hear what you have to say next!”

And Mrs Perezynski goes, “Your children have nits.”

Chocolate mint cookies: A treat to bake with bored children
7

Paul Flynn: how to cook the perfect potato rosti
8

Simple shakshuka: spice up your mealtimes with this Middle Eastern dish
9