Eight brilliant board games to break out over Christmas 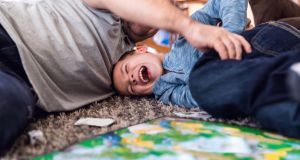 Sometimes at Christmas there’s nothing for it but to crack out a board game, Photograph: istock

Once presents have been played with, the fight over the remote control has led to an impasse, and dinner has been doled out, there’s only one other time-honoured tradition left for Christmas Day.

And, really, what’s not to like about board games? They’re a way of flexing expertise, knowledge or just Kerplunk-related dexterity in front of loved ones; they’re a way of getting youngsters off Fortnite for a bit; they’re good for bonding (unless you’re hyper-competitive).

Whether you’re looking for a new board game that everyone of all ages can enjoy, or fancy partaking in a time-honoured tradition, there are several canny choices out there; no screen-time necessary.

Suitable for 4+ players aged 12 and over

Winning at Balderdash is a question of bluffing skills as much as anything else: first released in 1984 and based on the parlour game Fictionary, Balderdash invites players to draw a “definition card” from a box and write the definition of the word as supplied on the card on a piece of paper (a word, admittedly, that only the most erudite and well-read have heard of, and often not even then). Everyone else then writes down a definition of the same word; either a true stab at what it plausibly means, or a tactical, wrong definition designed to put others off the scent. If you know Dad’s poker face by now winning shouldn’t be a problem.

Cards Against Humanity (€29.99 at Boardgamer.ie)

In these socially and politically sensitive times, Cards Against Humanity can sometimes go very, very wrong, but that’s half the beauty of what they call “a party game for horrible people”. Very simply, players complete a fill-in-the-blank using a selection of eyebrow-rising phrases printed on playing cards. The more risqué, politically incorrect or downright nasty the resulting phrase, the better. As if that weren’t outlandish enough, the rules state that the most recent player that visited the toilet gets to be the one to start. It’s that type of game. Don’t say you weren’t warned.

Cranium is a bit like six board games in one, meaning that everyone gets a chance to look good. The game professes to exercise all parts of the brain (performance, words, trivia, creative), so expect to flex your Pictionary, spelling, charades, trivia anagram, singing and sculpting skills. Very simply, you haven’t lived until you’ve watched your brother make a roller skate out of Plasticine, or heard Granny hum My Heart Will Go On against the egg timer. Junior Cranium is also available, and it’s surprisingly effective at putting grown-ups through their paces too.

Best for… doffing a cap to the classics

For 4 or more players, aged 9 and over

Look, in this current climate there’s only one way you’re affording to buy Brown Thomas. The original Irish edition, with its Kimmages and Water Works and Heuston Stations, has been replaced, as of October, in this special Dublin edition that features such capital landmarks as the Luas, the Temple Bar Food Market, Arnotts and DCU. It’s one of the great mysteries of our age that a board game about buying hotels and streets can incite such inter-family tensions. The trick, apparently, is to stick to buying just three houses per street. If you want to be extra sneaky – stay on four houses and prevent people from buying houses later in the game once you’ve used them all up. Either way, play until you’re either bankrupt or asleep. See also; Monopoly Fortnite, Monopoly Cheaters’ Edition or Monopoly Mario Kart (all at Smyth’s Toys).

Best for…the family that wants to play something entirely new

Oh, to meet and shake the hand of the brains behind this new party game…if you’re sick of Ludo or Connect 4 caused ructions last year, you could try your hand at this, um, sensory novelty. Already a YouTube favourite, What’s That Smell? is a scratch & sniff party game that asks players to guess the scent on the card correctly so as to avoid the reeks of one of the deadly Stank Cards.

From 50 smells that run the gamut from nice to nasty (think roses to rotting rubbish) the game uses modern scent technology to sentence one poor unfortunate to a few hearty whiffs of the Stank Cards: Diaper Blowout, Chunky Vomit, BO or Toe Cheese.

Best for…putting the Christmas socks to good use

Some of the world’s most famous (and weirdest) world records get a workout as players unleash their inner record-breaker. From 600 World Record Question cards, the trick is to break your opponents’ records when it comes to spoon balancing, wearing the most pairs of socks, flipping water bottles and the like.

4 or more players, aged 8 and over

Created by a group of canny transition year students at Loreto Convent Letterkenny, Hotspots doffs its cap to the birthplace of Football Special and Packie Bonner, and can probably lay claim to be the only board game endorsed by Daniel O’Donnell. The roll-up (read: portable) board reads as English on one side and Irish on the other. Essentially the game is a none-too-distant cousin of Monopoly. Here players compete to buy up popular tourist spots in Donegal, from Fanad lighthouse and Glenveagh National Park to Malin Head and Slieve League. A sneaky way to get an Irish/geography lesson in over the holidays if you’re that way inclined. See hotspotsboardgame.weebly.com

Strictly Come Dancing: The Board Game (€21.99, from smythstoys.com)

From The X Factor to Who Wants To Be A Millionaire? toy manufacturers have long teamed up with various cultural behemoths to create a Zeitgesity must-buy. Yet this ode to the BBC dancing competition takes some beating. The game features trivia questions about the show, and offers everyone the chance to show their nifty footwork off with challenges and dance-offs. As if that won’t feel enough like being right in the BBC studios, the game even comes with its own glitter-ball speaker and the voice of Craig Revell-Horwood (just don’t forget the batteries).