‘People in Ireland are far more friendly than aggressive’

New to the Parish: Joel Mutara is building a life in Ireland after living in Ugandan refugee camp 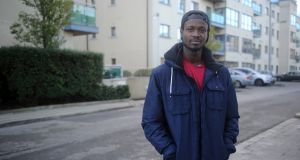 Joel Mutara: ‘I feel safe and free here. I’m able to follow my dreams and reach them.’ Photograph: Aidan Crawley

When Joel Mutara arrived into Dublin airport last April, he hadn’t seen his sister in more than a decade. The 24-year-old was travelling with his younger sister and brother after leaving their home in the Nakivale refugee settlement six hours west of Kampala, the capital of Uganda.

“It was such an amazing experience for me to finally see her. It was like turning a chapter in my life. We had been children the last time we saw each other, she didn’t even recognise my younger brother it had been so long. I can’t really describe my feelings in that moment. I was just so happy to see her after all those years. And of course she was happy to see us too.”

Mutara, his sister Dorcas and brother Benjamin spent five years living in sprawling Nakivale refugee camp which was established in 1958 and is today home to more than 100,000. Like the majority of the residents in the camp, Mutara and his siblings are Congolese although there are also thousands of refugees from Burundi, Rwanda and Somalia living in the camp’s 79 villages.

Mutara’s younger sibling were sent to a nearby school to continue their education while Mutara, who speaks French, English, Swahili, Kirundi and Kinyarwanda, volunteered as a translator with the camp’s health workers. “My mother was Congolese but our roots are from Rwanda and Burundi so that’s why I mostly grew up speaking Kirundi and Kinyarwanda. In Congo I spoke French but the English, I just wanted to learn it so I taught myself.”

“I worked as a translator supporting a healthcare assistant in the camp and I really enjoyed it. The thing I like most about it was I was serving other people, helping people in need.”

Most of the people arrive in the refugee camp desperately seeking food and shelter, he says. “It’s a camp filled with different nationalities, different people and different cultures. Most people lack the basic things we need to keep us alive. It’s a place where people are always in need of something.”

Mutara says the camp was often dangerous for women and that jealousy between different tribes placed women and children in a perilous situation. “There are also people in the camp who practice witchcraft so it’s a place filled with clashing cultures. There are bad people and there are good people in the camp but we managed it well by keeping busy with school and work.”

Mutara and his siblings left Congo for Uganda with his aunt and cousin when he was 18 years old seeking refuge from the danger and instability in their home country. The siblings were also eager to be reunited with their eldest sister who had settled in Ireland. Three years after arriving in Uganda, Mutara’s sister applied for her younger siblings to join her in Dublin through family reunification.

The application was accepted and two years later, in April 2017, the three siblings arrived in Ireland and moved into their sister’s home in Citywest. “Settling in was difficult at the beginning but with the help of our older sister we were able to catch up. The first thing she did was introduce us to her friends and show us the social environment. She helped us find information about school and college, the important stuff.”

Mutara’s sister, who works as a social worker, enrolled Dorcas and Benjamin in a local school where they are now studying for their Leaving Certs. She also helped her brother apply for a course in pre-nursing at Greenhills College.

“Back in the refugee camp I was involved in helping people and I decided it was a career I wanted to keep doing. My sister and brother are now in sixth year and are catching up. We’re coping.”

The worst thing in life is not being free. Freedom is something that cannot be compared to anything

It was difficult to make friends at first but Mutara says he’s finally starting to meet people through college. “People in this country are so friendly, they’re far more friendly than aggressive. I haven’t ever been bullied here; people have always been kind to me. So far it’s been a good experience.”

Like most people who move to Ireland from abroad, Mutara dislikes the weather. “It’s getting colder every day and I feel like I have to keep buying more jackets to keep warm. But it’s so green here, I really like that about Ireland.”

He hopes to continue his studies and become a nurse in the future. “If not nursing, my second option would be healthcare because I’m interested in helping people and giving support. In a few years I’d like to see myself working in that type of career.”

He misses his aunt and cousin who are still living in the Nakivale refugee camp. “My cousin is actually like another brother for me. We text each other and I miss them. And of course there were the good people in the camp and my friends. I miss them too.”

Mutara and his siblings are still sharing an apartment in Citywest in southwest Dublin but he hopes to eventually move out and find his own place. While he feels settled in Dublin, the college student struggles to sleep at night. “It’s because of all the memories in my head and of course I’m still trying to figure out the kind of life I live here. I’m trying to fit into this life.”

Asked if he feels welcome in the local Dublin community, he says it takes time to learn about different cultures. “But if you are a good person there is no culture that you cannot adapt to. I believe that if I stay away from trouble I can easily adapt to the culture around me.”

Mutara adds that he finally feels safe for the first time in his life. “The worst thing in life is not being free. Freedom is something that cannot be compared to anything. I feel safe and free here. I’m able to follow my dreams and reach them. I’m free now to do anything and overcome all obstacles.”

Caroline Flack obituary: From performer to popular TV presenter who connected with the public
9