Do you send Christmas cards? Well maybe you should

Tis the season to send cards but the tradition has fallen out of fashion. Let’s bring it back 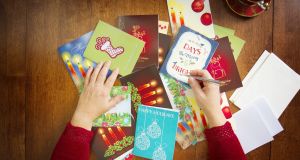 Sometimes when I’m feeling hungover or especially hormonal, I am liable to get weepy and sentimental about, well, just about anything. Elderly people buying the RTÉ Guide every week. The thought of Bovril and Ovaltine no longer being trendy. The closure of local post offices. The mere concept of guide dogs. Depending on how fragile I am, these are all enough to make my eyes sting and my bottom lip tremble.

Recently I found myself getting emotional about the dwindling popularity of Christmas cards. Once upon a time, people made a big song and dance about sending Christmas cards. At the beginning of December, a night was set aside to write the cards. Adults wrote to their family and friends, while children penned cards for their classmates. Messages were agonised over. Long-forgotten names of spouses and children were plucked from the ether. (“Merry Christmas to you and… Terry.”) Address books were consulted. An Post’s advice about when to send Christmas cards to far-flung places such as the United States and Australia was carefully heeded. Old grudges about who had neglected to send a card last year were buried because hey, it’s Christmas.

The reward for this diligent work? Stacks of Christmas cards being pushed through your letterbox every morning for the month of December. Cards bearing postmarks from exotic places such as Wexford, Westport and New Jersey. (“Well that’s from the Yank cousins in Newark anyway.”) These were then proudly displayed on the mantelpiece for the duration of Christmas with the fanciest ones – those adorned with specks of festive glitter, for instance – being afforded the most prominence. Even aesthetically dull cards such as those featuring a crib scene were warmly received. It was, to invoke Andy Williams, the most wonderful time of the year.

In recent years, however, the practice of sending Christmas cards has fallen out of of vogue. There are a few reasons for this. For one thing, letter-writing is practically obsolete, meaning there are generations for whom the act of even purchasing a stamp is as alien as using a rotary telephone. More importantly, however, the human race is more connected than ever before. We’re on Facebook, Snapchat, WhatsApp, Instagram, Viber, Skype and whatever else you’re having. And in an age of peak connectivity, there is little incentive to send a Christmas card. After all, why go to the bother of posting a handwritten card when you could just message them? If anything, sending a card when you’re already “friends” on every conceivable platform is probably overkill, right?

I am here to argue that it’s time to re-embrace the act of sending and receiving Christmas cards. No more complacency, no more laziness, no more “I’ll just text them” excuses. This is a tradition worth preserving.

For one thing, did you know that we are living in a golden age for Christmas cards? It’s true. No longer do you have to be content with cheesy cartoon snowmen. The advent of the internet means that you’re positively spoiled for choice when it comes to procuring unique Christmas cards. Scroll through Etsy and you’re bound to find some illustrators hawking their wares. Closer to home, independent stores such as Designist specialise in quirky, quintessentially Irish cards that would take pride of place above any self-respecting Irish hearth. Don’t you want to give someone the gift of a “Merdy Christmas, Ye Tick” card this holiday season?

Additionally, it is a truth universally acknowledged that there is nothing more delightful than receiving post. Unfortunately, my post tends to be either completely dull or pretty morbid. For example, I recently received a cheery letter from the credit union reminding me that funerals can be expensive and to consider starting a savings account so as not to leave my loved ones in the lurch when I eventually pass away. Helpful, sure, but it takes the joy out of receiving post. Christmas is the perfect time to redress this balance and make post exciting again. Everyone appreciates post. Nice post. Post you can hold in your hand and spend a few seconds deciphering the handwriting and postmark. Post that says, “Hey, I was thinking about you!”

Because that’s what it comes down to, isn’t it? Knowing that someone was thinking about you for a few moments and saw fit to wish you a merry Christmas and a happy new year. A group text on Christmas morning or a hope-Santa-was-good-to-everyone Facebook status might technically fulfil your social obligation, but it’s not exactly in keeping with the spirit of Christmas. It doesn’t say, “Hey, I was thinking about you!” so much as it says “Hey, just getting this out of the way so nobody thinks I’m a miserable bastard!” It’s neither personal nor generous and it certainly doesn’t elicit fuzzy feelings.

And besides, this is how we communicate all year long. Christmas is a time to take a step back from your phone and send something properly meaningful and special to someone without it being deemed stalkerish or creepy. It’s a time to connect with people in a way that goes beyond likes and idle “we must get a pint” chat.

This Christmas, seize the opportunity with both hands. Buy some cards, turn on Mariah Carey and get writing. Send them to your mum, your aunty, that college friend who you’ve been meaning to catch up with if only life would stop getting in the way for a second. The spark of joy when the card comes crashing through their letter box will be worth the effort, I promise.