Family Fortunes: We’d swish them at each other or throw the dagger at a door 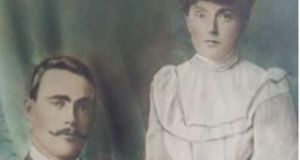 Michael and Elizabeth on their wedding day in 1913

Growing up in the 1960s in west Mayo, I remember being very curious about a sword and dagger in leather sheaths, gathering dust on a shelf in a shed out the back.

We were five brothers and one sister, and after a western film in our local picture hall, the sword and dagger occasionally, on a wet day, got the cobwebs cleaned off as we re-enacted some cowboy or Indian scene. We’d swish them at each other or throw the dagger into the back of a door, much to the horror of our dear mother if she caught us in the act.

We had been told that our grandfather had brought them back from Africa, but as both our grandparents and their son – our father – were deceased at this stage, their story remained a mystery. My research eventually shed light on it this past decade.

Our grandfather, Michael Joyce, was born in 1875 in the townland of Cuileloughan between Mulrany and Achill island, one of nine children. By the time of the 1901 census he was in Dublin and later, on November 18th, 1908, he sailed out of Liverpool, aboard the passenger ship ARO, bound for Lagos in Nigeria, where he worked as a bridge construction foreman, and so hence the African artefacts in our house.

Indeed, that journey to Africa was destined to shape the rest of his life. For, on docking in Dublin on his return, he lodged in a house on Amiens Street, where he met Elizabeth McGeough from Keady in Co Armagh.

They married in 1913 and set up home in Mulrany, overlooking Clew Bay. They had three children, one of whom, Jack, was our father. They themselves died in 1939 and 1941 respectively, but my siblings and I were all reared in the house they built, which still stands proudly in the centre of the village, on today’s popular greenway, where these days it is host to their great- and great-great-grandchildren.

As for the dagger and sword, well we still have them, rustier and partly corroded now. Apart from being a fascination in our youth, I also often think they cast some sort of African spell, for three of us, in adulthood, have felt drawn to and spent time on the great continent, in Zambia, Angola and Uganda.

Who is responsible for repairing a dangerous boundary wall?
8