Riyadh Khalaf: ‘Homophobia begins from a lack of education’

Youtuber’s videos about growing up gay in Ireland have racked up 45m views. Now he’s written a book 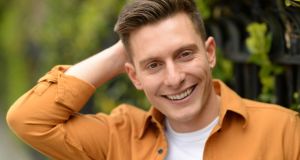 Riyadh Khalaf first came to prominence in an RTÉ series in which he discussed coming out to his father Sam, a formerly devout Muslim. Photograph: Dara Mac Dónaill

Riyadh Khalaf is standing on St Stephen’s Green when he is approached by two young women. “Are you Riyadh K?” asks one, referring to his YouTube handle. The two young women are Norwegian, on holidays in Dublin.

After gamely chatting to them for a few moments, Khalaf volunteers to take a photo with one of the women. She whips out a collapsible selfie stick and records a brief video for her vlog.

While the interaction might seem improbable, it’s par for the course for 28-year-old Khalaf. His YouTube channel has almost 372,000 subscribers, where his videos have racked up more than 45 million views.

Some of his most popular videos touch on his experience of being a young gay man growing up in Ireland, and have won him a legion of young fans from the LGBT+ community. As a result, he often gets stopped on the street and receives messages from fans across the world, from Alaska to Pakistan.

Now he has written a book entitled Yay! You’re Gay! Now What?, a breezy life bible for “young queer guys” that touches on everything from coming out to puberty to sex. It was a book that Khalaf says he was well placed to write.

The son of an Irish mother and Iraqi father, Riyadh Khalaf was raised in Bray in Co Wicklow. Growing up, he worshipped broadcasters such as Oprah Winfrey, Miriam O’Callaghan, and Gerry Ryan. As a teenager he set up a pirate radio station from his bedroom, and broadcast to his town.

His first brush with fame came in 2010 when he was one of six young people featured on the RTÉ documentary series Growing Up Gay, which explored the experiences of young Irish LGBT+ people. In the series, Khalaf discussed coming out to his father Sam, a formerly devout Muslim. The family’s story struck a chord with people across the country.

You can walk down the street holding your partner’s hand without necessarily fearing that you’re going to be attacked. Ireland has changed fast

“I still get stopped in various parts of the world by Irish people who saw it all those years ago and remember the impact it had on them,” says Khalaf. “RTÉ took a risk putting these young LGBT people on screen on primetime, and telling the story from their perspective for the first time ever. That show saved lives.”

After doing an “awful Leaving”, he decided to pursue a career in media. While studying in Ballyfermot College of Further Education, he landed on-air and production gigs with 98fm and Spin 1038. By 2014, he was focusing his efforts on his YouTube channel, starring in and creating several viral videos.

In one video, he allowed his mother to have a nose through his messages on Grindr. On another occasion, he called up the notoriously homophobic Westboro Baptist Church to ask how to get into heaven.

In 2016, he decided to take the plunge and move to London. A few months in, he got a call from his agent to say he had landed a gig hosting a BBC Three documentary series entitled Queer Britain. “I dropped to my knees and started crying,” he recalls. “I couldn’t believe my dream had come true.”

It was around this time he was approached by an editor at a publishing house to write Yay! You’re Gay! Now What? Khalaf says he didn’t necessarily feel ready to write a book, but was sold as soon as he heard the pitch. He describes it as a compendium containing all “the vital information on how to survive those difficult years”.

He says the book is not just aimed at young LGBT+ people, but also “for anyone who comes into contact with them”. Over a decade since he first came out, Khalaf enjoys a very close relationship with his parents. They even wrote a chapter in the book specifically for other parents and guardians of LGBT+ youngsters.

Khalaf empathises with parents who have an adverse reaction to their child coming out. “You have to understand that the kid has had years to come to terms with who they are,” he explains. “It’s a slow learning process that can be filled with sadness and then happiness and then pride.

“When a parent finds out, they don’t have that time to gently learn and come to terms with it. In that moment, their vision of their offspring is completely changed. They believe that everything they had hoped for and dreamed for is gone.

“The very act of having someone come out in your family can be so rewarding, because not only is this person now given licence to be themselves, but also you are now being brought into another world full of diversity and colour and allyship. You are part of the rainbow by having and accepting that gay person in your family, so enjoy the ride.”

Khalaf marvels at how far Ireland has come in the last few years in terms of promoting tolerance and acceptance of LGBT+ people.

“We have a gay Taoiseach,” he says. “Same-sex marriage is legalised. You can walk down the street holding your partner’s hand without necessarily fearing that you’re going to be attacked. Ireland has changed fast.”

But he is quick to point out there is a risk of that progress being undone. Recently, he has witnessed the conversation around LGBT+ issues take a step backwards in the UK.

Last month, parents in Birmingham protested plans to teach primary school children about LGBT+ rights. The parents, who were predominantly Muslim, claimed it infringed upon their religious beliefs. Khalaf says it felt like “a sad and scary regression”.

“By you preventing your child from understanding LGBT people exist and that you shouldn’t treat them badly, I believe that’s a form of child abuse,” he says. “What you are doing is setting that child up for a life of misinformation, prejudice, hate and eventual homophobia. Homophobia begins from a lack of education and a lack of exposure, which leads to fear.”

Some of the resistance to teaching children about LGBT+ relationships stems from an idea that there is something “inherently dirty” about them, he believes.

“I can’t tell you how wrong and offensive that is,” he says. “There is nothing more dirty about my relationship with my gorgeous boyfriend Josh than there is about the one between my parents. There is no difference. We fight, we laugh, we joke, we make love, we kiss, we hold hands.”

Outdated stereotypes about same-sex couples being “sleazy, sex-obsessed, dirty, deviant” need to be put to rest, he adds. “It’s just as f***king boring as everyone else’s sex,” he says of his sex life. “And clunky!”

With all that in mind, Khalaf says there is still more to be done when it comes to combating long-held prejudices.

“London and Dublin are two big cities that have come so far in the last 10, 20 years and it’s great to see that journey is continuing on,” he says. “But the only way it happens is if we actively push it towards that direction. None of this change and progression happens by chance. It’s got to be activists and allies coming together to say, ‘We expect more. We deserve more.’”

I am the luckiest unlucky person I know
7