Family Fortunes: On her 100th birthday my mother recalled the night the sea took its toll in 1926 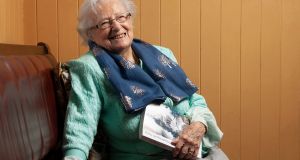 Gerardine Cusack celebrating her 100th birthday in the building where she was born, “The Sheebeen”, Westport, Co Mayo, which is now a pub and restaurant. Photograph: Michael Mc Laughlin

One hundred years ago, at the end of a blustery March, my mother Gerardine was born in what is now Cronin’s Sheebeen restaurant in Westport, Co Mayo. At the end of an equally blustery March this year, we celebrated her 100th birthday in the very same place.

The Sheebeen looks a little different now – but the walls of this old pub resound with happy memories for Mum and her youngest sister, sadly the only two of nine Hopkins siblings still alive.

One memory stands out for her – and it is not a happy one: The night the tide came in.

A stormy November night in 1926 saw something of a tsunami hit Clew Bay, and the ferocious and unmerciful sea took its toll on the small village of Rosbeg, near Westport.

There, in the pub then owned by the Hopkins family, my seven-year-old mother watched as water began spreading “from the fireplace in the shape of a boot” – soon enveloping beds and frightened children.

Her six-year-old brother sat holding on tightly to a small baby sister, dangling his feet in the water and giggling like mad. My mother was yelling for her Mum, who was busy mustering children into available dry clothes and urging them to neighbours’ houses “further up the hill”.

My grandfather, a sea pilot on Clew Bay all his life, could hardly credit what he was witnessing as sea water lashed the neighbourhood. He had, as always, closed the sluice gates earlier that evening and watched as the winter tide went out beyond nearby islands. The tide turned savagely hours later, wreaking havoc to all in its path. Efforts to save possessions saw all hands on deck, with every able man and woman in the village lending a hand. My mother recalls the piano being hoisted onto beer barrels in an effort to save it. For weeks afterwards, sheets of music littered the nearby shore – and some were even retrieved, dried out and proudly displayed on the salvaged remains of the much-valued Steinway.

Neighbours whose homes were untouched by the floodwaters were kind. Fires were lit, hot drinks dispensed. They accommodated the entire family in the months it took to dry and restore their home.

One hundred years later, my mother Gerardine (Hopkins) Cusack recalled that tumultuous night in the now dry and pristine walls of the Sheebeen.