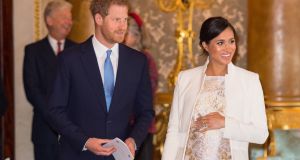 Meghan Markle and Prince Harry are to keep the arrangements for their birth of their first child private, Buckingham Palace has said. Kate Middleton and Prince William, the Duke and Duchess of Cambridge, appeared on the hospital steps within hours of the births of their three children, George (5), Charlotte (3) and Louis (11 months).

Harry and Meghan’s household said in a statement: “The Duke and Duchess of Sussex are very grateful for the goodwill they have received from people throughout the United Kingdom and around the world as they prepare to welcome their baby.

“Their royal highnesses have taken a personal decision to keep the plans around the arrival of their baby private.

“The Duke and Duchess look forward to sharing the exciting news with everyone once they have had an opportunity to celebrate privately as a new family.”

The announcement appears to confirm reports there will be no immediate photo call of the newborn, who will be seventh-in-line to the throne and not in the direct line of succession.

There have been no indications of where Meghan plans to give birth. The baby is due within weeks. Speculation has included that she may opt for a home birth, or choose the NHS Frimley Park Hospital, which is nearer the couple’s new home, Frogmore Cottage, Windsor, than the private Lindo Wing at St Mary’s Hospital, Paddington, where Kate gave birth. – Guardian