Nie Yuanzi obituary: A key figure in the Cultural Revolution 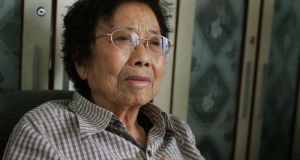 When Nie Yuanzi put up a vitriolic wall poster one day in 1966, she plunged into the political maelstrom of Mao Zedong’s Cultural Revolution. For the rest of her life Nie wrestled with the fame, and the infamy, that her act of rebellion would bring.

The poster brazenly denounced the Communist Party secretary of Peking University, where Nie worked, as well as two other Beijing officials. After Mao praised the poster, Nie vaulted to the front of the Red Guards movement, which Mao was stoking to attack his foes.

For a couple of heady years, Nie touched the peaks of power, meeting Mao, consorting with his aides and urging Red Guards to pillory fallen officials and scholars.

Yet even before Mao died in 1976, Nie fell from favour, a casualty of the ruthless politics of that time. When Mao’s successors turned on the Cultural Revolution, a decade of upheaval, persecution and purges, they also turned on Nie.

She was imprisoned and made a political pariah, accused of persecuting innocent officials, scholars and students, including Deng Xiaoping’s son, Deng Pufang, who became disabled after jumping from a building at Peking University to try to escape torment by radical Red Guards.

Nie died on Wednesday aged 98. Her death was confirmed by her son Yu Xiaodong, who said the cause was respiratory failure. She was cremated on Friday in a brief ceremony that brought together about 10 relatives, Yu said.

The Chinese news media has remained silent about her death, a sign of how sensitive the traumas of the Cultural Revolution remain. Next month the country will mark the 70th anniversary of the founding of the People’s Republic of China, and any reflection on the dark times of the republic is unwelcome.

Chinese scholars who interviewed Nie said that she exemplified how the Cultural Revolution could turn on its own loyalists. The persecutors often became persecuted themselves.

In her later decades, Nie tried to rescue her reputation. She denied some of the worst accusations against her, including that she played any role in abusing Deng’s son. But she never offered the full penitence that her critics called for. She instead dwelled on the notorious poster – a public denunciation called a “big-character poster” in Chinese political argot – that she and six other activists put up outside a restaurant on the Peking University campus.

Nie was not a typical Red Guard. When Mao began the Cultural Revolution in 1966, Nie was a midlevel Communist Party functionary at Peking University. At 45, she was more than two decades older than the high school and university students who formed the bulk of the Red Guards.

Nie was born on April 5th, 1921, in rural Henan province in central China, the youngest of seven children. Her father belonged to a long family line of well-off landowners and doctors, but many of his children embraced revolutionary politics.

Nie joined the Communist Party in 1938, in the early years of China’s war against the invading Japanese. She moved to Yan’an, where Mao had established the headquarters of the communist forces. The wartime struggle fostered unquestioning faith in Mao and the party among Nie’s generation, one historian said.

After the Communist Party came to power in 1949, Nie climbed the political apparatus in northeast China. Her big chance came in 1960, when she was transferred to the prestigious Peking University.

Despite her limited education, Nie was among the party loyalists sent to watch over the university, regarded as a seedbed of unorthodox ideas. In 1963 she was promoted to Communist Party secretary of the philosophy department, which was turning out teachers and theorists trained in Marxist-Maoist doctrine.

When Mao called for a Great Proletarian Cultural Revolution, Nie did not question his accusations that dangerous “revisionists” and “capitalist roaders” had infiltrated the Communist Party and were trying to derail his revolution.

Nie said that she and six other party activists associated with the philosophy department came up with the idea of a big-character poster laying out their frustrations with the university leader, Lu Ping, and that they had had no plans to ignite a wider political firestorm. But some historians have said that Nie was no innocent and that she became part of a scheme to undermine party leaders by lighting a political fuse at Peking University.

Nie was married twice; both husbands are dead, her son Yu said. She is survived by Yu, another son and a daughter. – New York Times