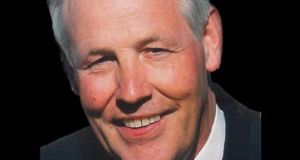 A quiet determination that Connacht rugby should stand shoulder to shoulder with the other provinces and a belief in the importance of improving youth structures characterised former Irish Rugby Football Union (IRFU) president Dr Tony Browne’s life-long dedication to the game he loved.

Dr Browne, a dentist based in Galway city, was honoured with the presidency of the IRFU during the World Cup year of 1991 and was presented with a Connacht Rugby lifetime achievement award earlier this year.

A leading member of the IRFU national committee, he chaired some of the most important national sub-committees, dealing with the development of schoolboy rugby and improving refereeing standards across the four provinces.

A native of the small village of Moygownagh near Ballina, in Co Mayo, he discovered a passion for rugby when he began boarding at Garbally College in Ballinasloe, Co Galway, where he played second row and number eight. He also represented the Connacht schools team.

His move to Garbally began Dr Browne’s life-long association with his adopted Co Galway, which was only broken during his studies at a dental hospital and for a brief period when he worked in the UK upon qualifying.

Returning to Galway, where he set up his own dental practice in Eyre Square, he coached Corinthians RFC to a Connacht Senior Cup title in 1969 and played a huge part in developing the club’s progressive youth policy, of which he was immensely proud.

He also served as coach of the Connacht senior squad for five years, from 1970 to 1975, while establishing his successful dental practice, building up the trust of a wide range of patients in the heart of Galway.

Appointed president of the Connacht Rugby Branch in 1990, he was particularly proud to become the first – and so far only – member of Corinthians RFC to hold the office of president of the IRFU the following year.

A regular at Six Nations games for decades, he loved the social aspect of representing Irish rugby overseas and built up friendships with the rugby fraternity across the globe.

Rugby colleagues respected Dr Browne for his quiet determination, his sense of humour, his modesty, and the professionalism he brought to his various roles with the Connacht Rugby Branch and the IRFU over the years. Dr Browne remained a trustee of Connacht Rugby right up to his passing.

His dedication to rugby was matched by his love of horse racing. Dr Browne knew the quickest route from Galway to every major racecourse in the country and had great fun trying to outwit the bookmakers.

He enjoyed getting involved with a syndicate who owned a successful horse called Golden Cygnet in the 1970s, a horse which remains the highest-rated hurdler of all time.

Dr Browne’s family took great satisfaction from the fact that a horse called Tony The Gent won the first race in Ireland following his peaceful passing in the family home, surrounded by his family, in Kingston, Galway.

Tony had enjoyed good health throughout the first 80 years of his life. He bore his recent illness without a scintilla of self-pity or a word of complaint, and with a pragmatism that demanded he would plan his own Requiem Mass meticulously, according to his son Paul, who delivered a eulogy during the ceremony at the Church of the Sacred Heart in Galway city.

Dr Browne’s dedication to rugby and horse racing was matched by his love for his family. He provided much support and encouragement to his five children and 17 grandchildren, albeit with a mischievous sense of humour.

Representatives of rugby clubs from all over Ireland attended his Requiem Mass, and his former rugby colleagues provided a guard of honour on his final journey to Rahoon Cemetery.

Tony Browne is survived by his wife Treasa, a native of Crusheen, Co Clare; his daughters Deirdre and Anne-Marie, his sons Paul, Eoin, and Niall, and his grandchildren.