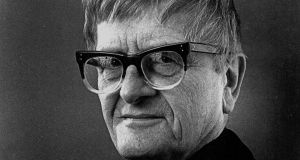 Canon Kerry Waterstone was a strong nationalist and participated in the 50th anniversary of the 1916 Rising in 1966.

Some people achieve great things in life and shout from the rooftops about the differences they make. But, this was not the case with Canon Albert Thomas (Kerry) Waterstone who has died in his 98th year.

The Church of Ireland rector of Tullamore, Co Offaly was the founder of a project which brought Protestant and Catholic teenagers from Northern Ireland for month-long stays with host families in the United States at the height of the Troubles.

The so-called Ulster Project – which still exists – offered these impressionable young people opportunities to build tolerance, trust and positive relationships with their peers in a safe environment at a time when Protestant and Catholics in Northern Ireland rarely socialised in their own communities.

The initiative started in 1974 after Canon Waterstone did a “pulpit swop” with the Rev Stephen Jacobson, rector of St Mary’s Episcopal Church in Manchester, Connecticut. The Rev Jacobson had been active in the American civil rights movement and was appalled by what was happening in Northern Ireland. The “pulpit swop” involved Canon Waterstone spending two months in Connecticut and the Rev Jacobson spending two months in Ireland. The idea to cultivate friendships across religious divisions was born.

Given its blessing by the Church of Ireland bishop of Armagh, George Otto Simms, and the Roman Catholic cardinal, William Conway, the Ulster Project soon took off bringing young people from throughout Northern Ireland to different parts of the USA. Many of the 15,000 teenagers – including some who are now Northern Ireland politicians – described their experiences as life changing. Running the project from their kitchen table in the rectory at Tullamore, Canon Waterstone and his wife, Edie, travelled to the United States every summer to fundraise and promote the Ulster Project.

As rector of the Tullamore group of parishes (which had seven churches at one point) from 1964-1990, Canon Waterstone organised upgrading of schools and church properties and opened up the running of the church to a wider group of people. He was also a strong promoter of the ecumenical movement which sought to downplay the differences between the different Christian denominations. In fact, when the Catholic church in Tullamore was burned down following a break-in in the early 1980s, Canon Waterstone offered St Catherine’s Church of Ireland to the local parish priest to hold Masses. The church was subsequently used for some Catholic weddings and when the Church of the Assumption in Tullamore was renovated following the fire, Canon Waterstone donated a baptismal font from the deconsecrated Lynally Church outside Tullamore

Well known throughout the community – attending everything from St Patrick’s Day parades to opening the local boxing club (he had been an outstanding boxer in his student days, gaining the Trinity pink scarf for his athletic achievements), he also knew who was sick or in trouble and was a good man to have on your side. He was also a strong nationalist and participated in the 50th anniversary of the 1916 Rising in 1966. That same year, he travelled to Mountjoy prison daily to visit local farmers from the National Farmers Association, imprisoned for not paying their rates. In 1982, he represented Kerry and the Church of Ireland on the platform which welcomed home the victorious Offaly football team which defeated Kerry in the All-Ireland football final.

Together with his wife Canon Waterstone had a strong interest in collecting antiques and paintings and spent many an evening at country auctions looking for hidden gems. He was also very involved in the local historical society and a keen supporter of the campaign promoting public access to the medieval high cross at Durrow Abbey just outside Tullamore.

Born the younger of two children to Archibald and Elizabeth Waterstone in Tralee, Co Kerry (hence the nickname Kerry), Waterstone won scholarships to Drogheda Grammar and Galway Grammar schools. He subsequently won a scholarship to Trinity College Dublin where he did a Bachelor of Arts , followed by divinity studies. He was ordained into the Church of Ireland in 1947 and served as curate at St Canice’s Cathedral, Kilkenny, before moving to Borris-in-Ossory, Co Laois, Piltown, Co Kilkenny (the parish of Fiddown) and then to Tullamore. A fluent Irish speaker, he was never afraid to speak his mind or do his own thing. His sermons were well informed and topical, making the scriptures relevant to the present day.

Following his retirement, he and his wife converted the deconsecrated church in Lynally near Charleville Estate to their home where he lived until his death.

Sick of plastic packaging? There’s a shop for that
9