‘I’ve tried to take control by starting a diet ... starving myself and fooling myself’

Hilary Fannin: ‘You’re pale. Are you hungry?’ my friend asked. I nodded 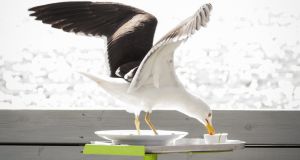 Seagulls, forced inland from the barren sea, were determined to relieve my friend of his breakfast. Photograph: iStock

I was in a pretty little coastal village in north Co Dublin with a friend recently, sitting on the sea wall, sipping black coffee and feeling hangry.

My friend, a man in his 60s, was eating a sausage roll and drinking a cappuccino which I had not only bought for him but had also stirred two sugars into, while he wandered up and down on the pavement outside the food emporium to take a phone call.

Now, sitting on a wall overlooking a choppy turquoise sea, we were engaged in fending off an attack on his person from a squadron of frantic seagulls, forced inland from the barren sea and determined to relieve him of his breakfast.

“It’s been quite a week for avian confrontations,” he said, while ducking the swiping seabirds. The day before, he told me, he’d been out running along the seafront, at his usual sedate pace and wearing his old grey hat, when a crow had landed on his head. The crow, its claws firmly adhered to his knitted cap, had something in its beak – a mollusc, my friend thought, or maybe a snail – which it attempted to break open by banging the shell hard on his head.

“A crow landed on your head while you were out running and banged a mollusc on it?”

“I assume the crow thought I was a rock,” my friend replied evenly.

“Well, I was wearing a grey hat and I do run extremely slowly,” he said, popping the last of the poppy-seeded sausage-stuffed pastry into his mouth, much to the disappointment of the circling gulls.

“Crows are very intelligent,” he continued, wiping his mouth with his recyclable napkin. “Watch them sit on overhead wires near traffic lights. They wait for the green light, drop whatever shelled cache they’ve got in their beaks, watch the cars crack it open, then retrieve it when the lights are red.”

I watched the seagulls scavenge around a nearby bin. In this upmarket neighbourhood, they’d be lucky, I thought, to find a half-drunk skinny decaf and a protein-ball wrapper.

We walked through the village, past darkened restaurants and shuttered bars on a side street festooned with “For Sale” signs.

My friend was telling me a story about the painter (and keen horseman) Lucian Freud and a zebra. Apparently, near the end of the painter’s life, a documentary film team brought a live zebra into Freud’s studio and encouraged him to walk alongside it. A misunderstanding between artist and equine, however, ended up with Freud hospitalised – the filmmakers’ arty contrivance had almost killed their subject.

My friend stopped and turned to me in the ghostly, empty street.

“What’s wrong? You look pale. Are you hungry?” my friend asked.
I nodded.

“Why didn’t you eat breakfast?”

“Because,” I hissed, “I’m planning on eating 360 calories worth of chilli-no-carne for dinner tonight, which leaves me with precisely 140 calories to spare for breakfast and lunch, thereby ruling out everything in the food emporium bar a tub of string beans, a bucket of balletic alfalfa sprouts or a lonesome baby meringue.”
My friend looked at me in blank confusion. “I’m afraid I’m not quite following you.”

“In these pandemic days,” I quietly informed him, “unable to engineer solutions for the various freaking little problems besetting my tiny, tiny life, I’ve attempted to take control by going on a fasting diet.”

“Yes,” I snapped. “A fasting diet! I’m not having Botox or fillers or droopy eyelid surgery in order to look presentable down a Zoom lens, which apparently is all the rage. I am simply starving myself twice a week and fooling myself in the process that I have the merest, most infinitesimal, semblance of control over my shagging LIFE – and it’s making me very very HANGRY!”

I realised that my decibel levels had increased, scaring both the seagulls and my mate away.

He returned with a sandwich – cheese and sun-dried tomatoes and something that tasted like mayonnaise on speed. I ate it in the car watching the sun come out, safe from the disorientated seabirds, grateful to see the back of that particular skirmish with self-flagellation.