‘It doesn’t matter if I’m in a wheelchair. I’m not angry with Ireland for what happened’

New to the Parish: Paulo Cassis Peres arrived from Brazil in 2017 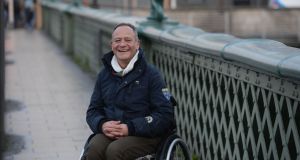 Paulo Cassis Peres lost the use of his legs a month after moving to Ireland, while undergoing minor surgery. Photograph: Alan Betson

Two years ago Paulo Cassis Peres’ life changed forever. The Brazilian videographer was one month into a long-awaited adventure to Europe when he ended up in hospital after suffering a sharp pain in his side. Less than two days later the 46-year-old lost the use of his legs.

When we meet in a bustling Dublin hotel lobby I am immediately struck by Peres’ happy demeanour and positive attitude. For more than four decades he led an active life, yet since 2017 he has used a wheelchair - a situation that would send many spiralling into depression. However, while he is undeniably frustrated by ongoing visa complications, Peres laughs and smiles throughout our conversation.

When he first arrived in Ireland the plan was to spend a couple of years learning English with his wife. Growing up in Sao Paulo, Peres became fascinated with Europe from seeing the photographs his grandfather, who was an English language teacher, used in class. Given his Spanish and Italian background, Peres became obsessed with the idea of visiting his grandparents’ home countries. “Since I was a child my dream was to discover more of the world. But I got married and started my own company producing photographs and videos so I deferred that dream.”

It was only when his three step-daughters - his wife’s children from a previous marriage - had grown up that he started to reconsider the trip. “The dream of discovering the world was still there. I took advantage of the fact that the children had all grown up. My wish to live outside was very strong.”

Peres first heard about Ireland as a teenager through rugby at his school in Sao Paulo. “The rugby players used to say Ireland had the best team in the world. I also knew about Dublin because of U2 and got to know the city because of their music videos. I think U2 are more famous in Brazil than here.”

While Peres’ wife was not a fan of cold weather she agreed to join her husband in Dublin. “I felt comfortable choosing Ireland because the Irish are famous for being friendly and Dublin is a safe city and economically advanced. It seemed like the ideal place for me to have this experience.”

In July 2017 the couple arrived in Dublin where Peres immediately started English classes and found work videoing show jumping events around Ireland. One afternoon, about a month after their arrival, Peres started to feel pain on the left side of his torso. “I thought it was related to something I’d eaten so I fell asleep with a lot of pain. The next day was much worse so I called a doctor through the private medical insurance I had. He told me I had to go to hospital.”

Following a series of tests, Peres was told he was haemorrhaging from an artery between his kidney and spleen and needed to undergo “low risk” surgery to resolve the issue.

“I received a blood transfusion and the surgery lasted about two hours with local anaesthetic. But after the surgery my legs wouldn’t move. I asked if anything had happened to my legs but no one answered me. Eight hours passed and the movement didn’t come back.”

Peres says a doctor eventually explained that he had suffered a spinal cord injury during the surgery. He spent the following three months in hospital while a number of reports on his situation were prepared for the insurance company. He says doctors recommended he return to Brazil for physiotherapy but he wanted to say in Ireland.

“It was because of my visa situation and the fact that I wouldn’t have access to public health supports here that they recommended it. But I didn’t want my dream of travel to end at that point. Rationally, I realised the physiotherapy here would be the same as the physiotherapy in Brazil so it didn’t matter where I was. I was reliant on my private insurance for my rehab. If I had to be rehabilitated I wanted to do it here.”

Unfortunately Peres’ insurance did not agree to cover the cost of the necessary weekly sessions at the National Rehabilitation Hospital in Dun Laoghaire. However, word had started to spread through the Dublin Brazilian community of Peres’ predicament.

“A Brazilian girl posted on Facebook about what had happened to me and I received more than 100 messages of support and words of kindness. Among those messages three physiotherapists offered their services and came to see me three times a week. They didn’t charge anything.

“The Brazilian community also organised two big fundraising events which helped me pay my rent for a few months.”

Two years on, one of these physiotherapists continues to work with Peres free of charge. Peres believes that with the right kind of support, he may walk again. For now, he’s trying to come to terms with his disability. “It’s still a daily learning process. My psychological state became quite shaky for a while. I had to learn acceptance.” Meanwhile, his wife has spent the past few years working as a childminder to make ends meet while Peres is back taking photos.

With the support of the exchange agency which organised his trip to Ireland, Peres has taken legal action against the hospital where he was treated. As this case is ongoing, he could not discuss the details for the purposes of this article.

Peres and his wife are struggling to secure a visa to remain in the country while the legal proceedings take place. The student visas they arrived on have expired and while Peres temporarily received discretionary permission to remain from the minister for justice, the department recently contacted the couple to say the minister was unwilling to continue with this arrangement. He has been told he must now enrol on a degree course to stay in the country on a student visa, something Peres says he is unable to afford.

“I want to start a new life working and paying my taxes. I want to live a normal life like any other citizen. I’m not angry with Ireland for what happened. I believe I still have a path to follow and it doesn’t matter if I’m in a wheelchair or walking with sticks. I just hope for justice so I can continue with my life.”