'We arrived here with just two suitcases. We were starting again from zero'

New to the Parish: Anabella Parisi arrived from Argentina in 2015 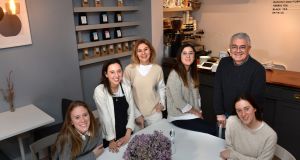 Anabella Parisi was in her early 20s when her younger sister Macarena decided to spend a year abroad before university. While Parisi continued working in a shoe shop in the local shopping centre in Córdoba, her sister spent a year working in Dublin. She watched from afar as Macarena built a life in a foreign city where she worked in a cafe on the banks of the river Liffey.

By the time her sister returned home, Parisi was so fed up with the daily monotony of working in retail that she soon to fly to Ireland and take her place. “She had talked so much about Europe, I was tempted to go and had already finished my studies. She had made really good friends with the owner of the shop where she worked in Dublin and told her my sister wants to try and come to Ireland. So she gave me her position.”

I was standing at the traffic lights and probably had a lost expression on my face. But then an old lady came up and asked where do you need to go? She walked the two blocks with me to the hostel

Born in the Argentine state of Santiago del Estero, Parisi moved to San Carlos de Bariloche in northern Patagonia with her parents and sister when she was two years old. She spent her childhood on the banks of Lake Nahuel Huapi in the family home on the outskirts of the city. “It was a nice place to live for kids, really safe. The winter was cold but we could play in the snow and in the summer there’s loads of lakes, even if they were freezing.”

When Parisi was 15, the family (which now included two more twin sisters) relocated to the city of Córdoba because of her father’s work. After school, she trained as a pastry chef but chose not to go into the restaurant sector after graduation. “Unless you work in a really good hotel or a Michelin star restaurant the payment and working hours and conditions are really bad. Imagine working with 40-degree heat with no air conditioning. I said why should I suffer?”

In 2015, on her sister’s recommendation, Parisi boarded a flight to Ireland. She recalls a woman approaching her on her first day in Dublin as she wandered the streets trying to find a hostel.

“I was standing at the traffic lights and probably had a lost expression on my face. But then an old lady came up and asked where do you need to go? She walked the two blocks with me to the hostel. That’s not common in Argentina, especially because nowadays Argentina is more dangerous so you don’t trust everyone. In Argentina if someone touches your shoulder you’ll think they want to rob you. But here people trust each other. I noticed that about Ireland straight away.”

Parisi spent a year in Dublin before returning to Argentina to be with her boyfriend. She tried convincing him to return to Ireland with her but he refused to leave his family. “I was working as a manager in a clothes shop but there were days I spent six hours on my feet doing nothing. I could save money because I was living with my parents but I asked myself, do I want to live like this forever? I texted my ex-boss in Dublin and she said she would take me back.”

While Parisi was back in Argentina the youngest members of the family, Luciana and Agustina, decided to use their Italian passports and spend a summer in Dublin. By the time Parisi arrived in Ireland for the second time, the twins had decided to stay. With three daughters now living in Dublin, Alejandro Parisi and Lucrecia Della Rosa started to consider a move. They were also conscious of the struggling economic situation in their home and worried about the future. The couple visited Ireland a number of times before selling their two cars and a lifetime of belongings so they could follow their family to Europe.

“We arrived here with just two suitcases,” says Della Rosa in Spanish. “We had to come here because the girls didn’t want to come back to Argentina, there wasn’t another option. We were starting again from zero.”

For Parisi, her parents’ decision to move did not come as a shock. “It was something they were planning for a long time and it kind of made sense, what were they going to do alone in Argentina? They’re not old yet but if we were going to make our life here what would happen when they did start getting older? If they didn’t do it now it wouldn’t ever happen.”

We didn’t want it be 100 per cent Argentinean because then it would only focus on Argentina and forget where we are. We wanted to make a fusion but show our culture through the menu.

The family had already discussed opening a coffee shop together in Dublin and Parisi began researching premises ahead of her parents’ arrival in April 2018. The following September her father discovered a notice online that a former coffee shop on the South Circular Road was available to let. With Portobello number one on the list for potential locations, Parisi was delighted.

The family set about refurbishing the small premises while piecing together ideas for a food menu. “We didn’t want it be 100 per cent Argentinean because then it would only focus on Argentina and forget where we are. We wanted to make a fusion but show our culture through the menu.

On January 16th the Alma cafe opened its doors to the public. “I was shaking that day but everyone came in asking who are you? Most of them were neighbours from around the area who were curious. It filled up quickly because it was the new boy in the hood.”

Ten months on, the family are exhausted but happy with the business. Parisi’s sister Macarena, who followed her family to Ireland earlier this year after completing her studies, also works in Alma while Parisi manages the place.

Parisi is confident she made the right choice by coming back to Ireland and is excited about the future of the cafe. She’s also proud of her parents for making the move. “Sometimes I stop and think, oh my God, we opened a coffee shop in Ireland. Who could imagine we would all end up here? It’s crazy.”

Things have been slightly more challenging for the older generation. “It hasn’t been easy,” admits Della Rosa. “We had built everything up in Argentina. It’s not easy to make friends here. For the girls it’s easy, not for us, especially with the limitations of not speaking English. But the girls are here.”