'It's hard to be black in Ireland. When you're a kid, you want to fit in'

Alima Doumbouya arrived from France in 2007 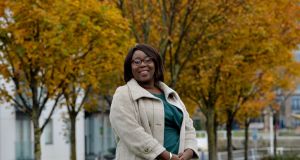 Alima Doumbouya never felt different before she moved to the Basque country in southwestern France in her early 20s. Growing up in the Parisian suburb of Boulogne-Billancourt, she was surrounded by children whose parents had moved to France from abroad.

“It was a big melting pot. A poor area some would say and parts still have a bad reputation to this day. But everybody knew each other, it was nice and friendly. It was the norm that everybody had parents from somewhere else.”

Doumbouya’s father had arrived from Senegal in the 1960s to work with Renault cars, and two decades later her mother followed. She and her two sisters grew up in a strict household but she idolised her father who lost his sight and had to leave work when she was a child.

'I asked if the grass was real, it was so green, and they laughed at me. They said you’ll find out why, and then it rained for three days non-stop'

After completing her undergraduate studies in Paris, Doumbouya moved to the French city of Bayonne to study for a master’s in international trade. Suddenly, for the first time in her life, she felt acutely aware of her skin colour. “There was no diversity and everyone looked at me in a funny way. I basically noticed that I was black when I moved to the Basque country. But I got on really well with Basque people and made loads of friends. I think it prepped me for moving to Ireland. ”

After completing her studies, Doumbouya moved back to Paris with plans to save money and find work in Latin America. However, when she was offered a job in logistics in Ireland, she decided to take the risk and move north.

In 2007 she arrived in Shannon, a town she had never heard of before. There, she met a couple of French interns who gave her a quick introduction to Ireland before they finished up their placement in the company.

“I asked them if the grass was real, it was so green, and they laughed at me. They said you’ll find out why, and then it rained for three days non-stop. They told me that the streets were bilingual and that the people were really religious. I had three days of lessons in how to be Irish.”

Despite already speaking English, Doumbouya initially struggled to understand her co-workers from Clare and Cork. “I couldn’t understand unless they spoke really slowly, they all had different accents. They mixed talk between rugby and slagging people off in work. But I wanted to be understood and make myself heard so I tried to focus on what they were saying and after a while I picked it up.”

Life in rural Ireland was a shock for the young Parisian. “I was right in the countryside and it was really quiet. I was so surprised there was no public transport, I’m still surprised by that. I was used to being anonymous and doing whatever I wanted but that wasn’t the case in Shannon.”

After six months in Co Clare, and a short stint in Galway, Doumbouya found a job with a clinical research company in Dublin. Living and working on the south side of capital, Doumbouya quickly noticed how white the city was south of the Liffey. “There were no blacks once you crossed O’Connell Bridge. I remember taking the Luas and being the only black person on it.”

Doumbouya was frequently asked whether she was really French. “In people’s minds you could only be French if you’re a white man wearing a beret and holding a baguette. When people saw me coming they’d ask ‘how come you’re French?’ I’d go into a really short, condensed version of French history, its empire, how people born in Senegal before the end of the colonies were automatically French.

“It happened a lot, almost every night after a few drinks someone would ask me. I met someone who said I spoke really good French. I had to get the explanation pitch perfect. I don’t think it comes from a bad place, but it was frustrating.”

While Ireland is rapidly becoming a more diverse country, Doumbouya worries that young, black Irish teenagers may struggle to feel comfortable in a country where the media and politics remain almost entirely white. “I think it’s hard to be a black person in Ireland. When you’re a kid you want to fit in. They need more role models; not just people on reality TV but role models like artists or writers.”

'The Irish are proud of who they are and this is what I want in my life too. I think being here has made me a better person. Moving here, I had to open my mind'

Second-generation immigrants often struggle to find a balance between their parents’ culture and the life they are building in a new country. “They don’t know where they belong. They have two cultures: the culture at home of their parents and the culture in school and other people around them. I remember growing up, there was a bit of a clash between the two.”

During her 12 years in Ireland, Doumbouya has watched the country transform. While she was not allowed to vote, Doumbouya became involved in the 2015 same-sex marriage campaign and felt strongly about women having the right to access abortion care during last year’s referendum. “Same-sex marriage was really close to my heart. I never thought Ireland would move that quickly. In fact, I didn’t believe we’d see gay rights in France or Ireland in my life.”

Despite Ireland becoming a more liberal country for women and the LGBTQ community, Doumbouya believes racism remains a big problem. There is no excuse for the ignorance some people show towards people of colour, she says.

“I’m not 16, I can definitely cope when somebody says something bad to me and I can reply back in their own language. It’s not omnipresent but it’s always there. I can still see the people looking at me.”

“It does affect me but I have really good friends and have met some really genuine people here. I’ve made a family for myself here.”

Since her father’s death in 2013, Doumbouya visits her mother in Paris more often. However, Ireland is where she wants to build her life. “What I like about here is that people are really proud of their origins and their heritage. The Irish are proud of who they are and this is what I want in my life too. I think being here has made me a better person. Moving here, I had to open my mind.”