Irish people ‘are interested in chatting, but the friendship doesn’t last long’

New to the Parish: Anna Surkova, who lives in Co Cork, arrived from Ukraine in 2018 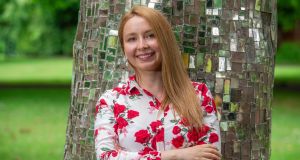 Anna Surkova: ‘I feel more freedom in Ireland. I feel you can do what you want.’ Photograph: Michael MacSweeney/Provision

When Anna Surkova turned 16 she decided she wanted to move abroad to learn English. Coming from a modest background in central Ukraine, Surkova knew this goal seemed far-fetched and unrealistic to those around her.

However, as she grew older she became more conscious of the lack of opportunities for young people in her home country and increasingly determined to fulfill her goal of becoming a fluent English speaker.

Born into a Russian-speaking family, Surkova grew up in the city of Dnipro (known as Dnipropetrovsk until 2016) in central Ukraine.

In Ukraine the economic situation is very challenging; some people really struggle. My family always supported me but I knew they couldn’t afford to send me to an English-speaking country

“My grandfather was a lieutenant in the army when it was still the Soviet Union and got an apartment here through the government. I come from a very hardworking family; my mother works in the labour and security department at the airport. But even people who work hard still find it hard to make ends meet.”

Growing up in Ukraine felt like a double-edged sword, says Surkova. She loved her city, her friends and family but knew young people were leaving the country because they couldn’t find opportunities for professional growth and development.

“In Ukraine the economic situation is very challenging; some people really struggle. There are so many bright and hardworking people but it’s hard to make it. My family always supported me but I knew they couldn’t afford to send me to an English-speaking country.

“Being a non-EU citizen and relocating abroad was something nearly unimaginable and extremely hard for someone from a modest family. But I decided I would make it happen myself.”

Surkova applied to study at university abroad but was unsuccessful so settled on studying English philology in her home city while simultaneously studying a second degree in logistics at another university. “I loved English literature and the way it sounded. It think it’s a very melodic language. I’ve always had an innate affinity towards English and was fascinated by the English accent.”

At university she met a tutor who spoke with a Welsh accent. “I loved his attitude, his outlook on life and his overall mentality of being positive. It seemed everything was possible in the West.”

My very first apartment was in an Airbnb at an Irish castle. It felt authentically Irish but was so cold and wet outside I just wanted to pack all my things and go back home

In 2017 Surkova secured a place to study in Germany and moved to the city of Heidelberg for a year. But she struggled to settle and couldn’t set aside the nagging feeling that she actually wanted to be speaking English rather than learning German. She started applying for jobs abroad and in 2018 was offered a position with a logistics company in Cork.

She briefly returned to Ukraine before flying to Ireland in March 2018. “I had come from a city of one million people, so Cork felt very small and cosy. Where I lived we have skyscrapers, but here you can see the skyline.

“My very first apartment was in an Airbnb at an Irish castle. It felt authentically Irish but was so cold and wet outside I just wanted to pack all my things and go back home. I felt very insecure and didn’t know anyone.”

Settling into life in Cork was made more difficult by the fact that Surkova had to wait three months for her work visa to be confirmed before she could start her job. She also struggled to meet people.

“At the outset not having any friends in Ireland was quite tough, as I’m a very sociable person. I thought I’d be fine, that I was grown up and brave. But being thousands of kilometres away from home and realising how hard it is not have any connections at all was quite disheartening.

“At first I was working a lot and didn’t have much time to get to know people. I started using a meet-up app which helped a lot. I have international friends now but I would say establishing contact with Irish people can be hard.

I have one Irish friend. She didn’t know anyone in Cork either. Those who studied here and went to school here are interested in chatting, but the friendship doesn’t last long

“I have one Irish friend from my company but she’s from Dublin and moved here alone. She didn’t know anyone in Cork either. But those who studied here and went to school here, they’re interested in chatting with you but the friendship doesn’t last long.”

Surkova said she needed about a year to adjust to the Irish climate. “I found it very challenging getting used to the wild Atlantic weather and stormy winters. The weather in Ukraine is very continental. It’s extremely cold in the winter, sometimes down to minus 18 degrees, and excruciatingly hot in summers. In winter it can snow a lot and children still go to school even when it’s  minus 10, unlike in Ireland where everything closes if the temperature drops below zero. It took a while to get used to the wind and humidity here but now I like it.”

Surkova now works for an online cloud company and is completing a level-eight course in digital marketing. She recently set up a YouTube video as part of her studies called Anna’s Diaries, which offers tips to foreigners who are planning to move to Ireland.

“I wanted to help people so they know what to expect. When I was searching for an apartment I tried to find a video on how to find a flat and there were none. So I decided to create my own YouTube channel.”

My mother knew I could open up my potential here and really find myself. I feel more freedom in Ireland. I feel you can do what you want

The 26-year-old says there are certain expectations among friends and family in Ukraine that a woman of her age should be married and starting a family.

“Most people get married at 24 or 25 and I know people in Ireland would think that’s unusual. This is changing in Ukraine but there’s still lots of pressure. If I said I suddenly wanted to change my career people at home would think I’m crazy. You’re supposed to take certain steps and if you deviate from that path people become very judgmental.”

Surkova’s mother has been very supportive of her move abroad, however. “My mother let me come here because she knew there were lots of young people at home in Ukraine who could not find work. She knew I could open up my potential here and really find myself. I feel more freedom in Ireland. I feel you can do what you want.”

This article was edited at 8.36pm on July 8th