Obituary: Allen was a Michelin star chef, writer, teacher and a born hotelier 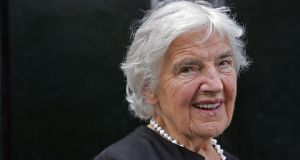 Myrtle Allen’s philosophy on food sounds simple enough now but her approach was regarded as revolutionary at the time. Photograph: Eric Luke

Internationally renowned as the “matriarch” of modern Irish cuisine, Myrtle Allen, who has died at the age of 94, was the doyenne of Ballymaloe House in east Cork and one of the most influential Irish people of the past half century. A Michelin star chef, she was also a writer, teacher and a born hotelier.

With her husband, Ivan, who died in 1998, she put the historic Norman house on the map as one of Ireland’s leading restaurants. Indeed, such is Ballymaloe’s current reputation that in 2015 the centuries old house was named on a gold list of the world’s top 100 hotels, the only Irish venue to be so included. Still being run by the Allen family, Ballymaloe House has now been in business for more than 50 years.

Born into a family of Cork architects named Hill, who had designed significant buildings in the city, she was expected to follow in her father’s footsteps and those of her forebears, but instead she fell in love with Ivan Allen and they married in 1943. He was then a vegetable grower at Kinoith farm in Shanagarry, a property he was later to inherit when it’s owner died. The Ballymaloe Cookery School, run by her daughter-in-law Darina Allen, is now based there.

In 1947 the couple bought Ballymaloe House and the surrounding farmland. Having learned to cook at the Cork School of Commerce, she was 40 when, in 1964, she turned her dining room into a restaurant, calling it the Yeats Room as they had bought several paintings by Jack Yeats. Not only did she have six children, the youngest just three, she was also deeply involved in Macra na Feirme, the organisation representing young farmers. It published the Irish Farmers Journal and in 1962 she became its cookery correspondent. Though elected national vice-president for the Munster region in 1959, she failed in her bid for the presidency four years later.

Her philosophy on food sounds simple enough today but her approach was regarded as revolutionary at the time. She summed it up in the following nine words “local, seasonal, organic, flavoursome, sustainable and superbly cooked food”. She believed in using fresh ingredients and changed her menu to keep abreast of seasonal changes whether it was home produce from the farm at Ballymaloe, the impressive range of greenhouses at Kinoith, fish freshly landed at Ballycotton, or lamb and beef from the rich farmlands of east Cork.

In response to demand for overnight stays, a few unused rooms and sometimes even the children’s bedrooms were pressed into service as Ballymaloe became a guesthouse and then developed into one of Ireland’s finest hotels.

In 2013, a 50-minute documentary on her contribution to Irish food culture, Myrtle Allen: A Life in Food, was aired on RTÉ television. Depicting her as “one of the most influential and culturally significant people in Ireland”, it tells the story of her life and the quiet revolution she had started when she opened the restaurant.

In her view the overwhelming success of the business was unexpected. “I didn’t think it would become this big,” she said. “We didn’t have any grand plan; when you are in a certain situation and you have got to live and when you have got to make money, you do what you have to do.”

Much to her delight, most of the adult Allens, including grandchildren, are involved in the operation. “The third generation are great,” she said. “You come across families where the children don’t want to do anything and they want to go into the family business, so we are lucky that a lot of them are so interested in it.” However, she also told a guest: “As long as I’m here, they will do things my way.”

She was a co-founder of Euro-toques International and founded Euro-toques Ireland, both organisations through which professional cooks promote and protect the quality of Europe’s culinary heritage. From 1994 to 1997 she was president of the international body.

In a bid to promote Irish produce in France, in 1981 she took over a restaurant in Paris originally opened on behalf of Irish farmers. La Ferme Irlandaise served draught Guinness and traditional Irish food. It did a brisk business but eventually closed.

Under her guidance the Allens have established a restaurant at the Crawford Art Gallery in Cork, a cafe and craft shop close to Ballymaloe House, and have also created a thriving relish business. They have redesigned and turned the old grain store at Ballymaloe into a venue for seminars and similar events. The cookery books span three generations from Myrtle Allen to Darina Allen and Rachel Allen.

Among numerous awards for excellence, she was conferred with a doctorate of laws by UCC. A civic reception was held in Cork City Hall in 2013 to celebrate her contribution to the food industry of Ireland.