The time of my life: ‘There was a kind of joyful chaos to it all’

Naoise Nunn on the first Leviathan 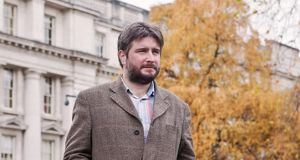 Naoise Nunn: “I’m delighted to bring the ethos and the fun of Leviathan to the Library of Progress at Body&Soul later this month.”

The venue was the Hub on Dublin’s Eustace Street, whose subterranean room gave up the odours of the ancient sewers below. The date was December 5th, 2003, and the occasion was the very first Leviathan political cabaret featuring a confounding line-up that included Ronnie Drew, Sue Collins, Dermot Carmody, Eoghan Harris, Des Bishop, Pat Rabbitte and John Waters.

My friend and mentor, Richard Cook, co-founder of the Cat Laughs Comedy Festival, which I’d worked on for years at that stage, introduced me to Declan McGonagle at the City Arts Centre which was then conducting the Civil Arts Inquiry and looking for new ideas for public engagement in the city.

There used to be a class of Irish pub which banned all talk of politics and religion. I never saw the appeal of these dull spots and always looked for places where sharp and deep arguments could continue towards the dawn. My idea was to see if we could put political debate in a context where people would engage with and be fired up by it as part of a night’s entertainment.

Ronnie sang songs of the working man and woman; Sue Collins was her most brilliant Carmel; Des rapped about Dev; Pat Rabbitte was hilarious about the Fianna Fáil’s conference in Strokestown; as was Dermot; and Eoghan Harris and John Waters were the reactionary Statler and Waldorf of the show as they conversed between two facing armchairs. There was heckling and hilarity and a prominent national newspaper columnist was (temporarily) ejected for being too drunk and unruly. There was a kind of joyful chaos to it all.

Further editions of Leviathan followed hosted by, variously, Dara Ó Briain, Eamon Dunphy and ultimately David McWilliams, and the format was fine-tuned and developed to present our audience with speakers who, in many cases we hoped, challenged their thinking, their received wisdom, their suite of ideas. We moved from the Hub, through the Spiegeltent, to Crawdaddy at POD and beyond to Electric Picnic where Leviathan has formed the core of the MindField arena since 2006.

I’m delighted to bring the ethos and the fun of Leviathan to the Library of Progress at Body&Soul later this month, where we’ll be celebrating all that is good about human curiosity, the scientific method and critical thinking at a time in history when it’s never been more important. And, on that weekend, I will think back fondly of Ronnie Drew arriving in a taxi, cursing and straight off the stage of a panto in he was performing . . . in the Olympia. exactly 150 metres away.

From Marianne to Claudia Winkleman: The rise of the lockdown fringe
7