‘I had read about Ireland and knew they respected human rights’

New to the Parish: Nasir ElSafi, an artist and journalist, arrived from Sudan in 2017 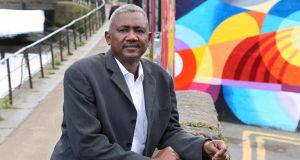 Nasir ElSafi: ‘I was tortured mentally and physically. Some of the people I was arrested with were killed.’ Photograph: Joe O’Shaughnessy

Nasir ElSafi was arrested and imprisoned three times before he fled Sudan. Each time, the journalist and artist was tortured for his criticism of human rights abuses in his home country. During one period of incarceration a prison guard broke his leg, leaving him with a lifelong limp.

“I was writing about what the government was doing and how they were treating people, and because of that I was arrested. We were tortured in every way. I was beaten and burnt using hot iron rods and cigarettes. Sometimes they would put us face down in the sand and pour water over us. We were left to sleep outdoors at night with no shelter.

“I was tortured mentally and physically. Some of the people I was arrested with were killed. It was very stressful, I didn’t know what was going to happen to me and I was scared for my family’s safety.”

There was no freedom for journalists to write freely. We were living under a dictatorship and could not write what we believed

ElSafi worked as a journalist for 17 years before fleeing the capital, Khartoum, in 2017. Writing his articles and blogs had become increasingly perilous under the rule of Omar al-Bashir, who controlled the country for three decades before being forced out of power by the Sudanese military in April this year.

“There was no freedom for journalists to write freely. We were living under a dictatorship and could not write what we believed.” ElSafi put his safety at risk by criticising government policies and calling for greater awareness of women’s rights.

ElSafi, who was born and brought up in the city of Kosti, says his family’s strong moral values pushed him to write about what he believed in. “My family was very political and these were the issues being discussed in my home every single night. I needed to write about them.”

He also found an outlet for his political beliefs through artistic expression; he started painting at school in 1987. However, Bashir’s political takeover two years later forced the young artist to continue his work in secret.

“Bashir’s government was against all form of art and treated artists very badly. Sudan has such a long history of art, dating back to ancient civilisations, but it was no longer appreciated in my country. It was difficult for me to carry out that work.”

After leaving school, ElSafi moved to Khartoum where he witnessed the city transform under the Bashir dictatorship. “So many people came to Khartoum because of the war; it became very crowded and living standards were bad. The government forces were attacking and kidnapping, so people had to leave.”

ElSafi, a Sunni Muslim, watched as the Bashir regime began to promote a more radical form of Islam. “Most people in Sudan are peaceful Muslims but this government came in with a different type of Islam. They tried to change the mindset of the people – their Islam became a religion for killing people, for separating families and for radicalism.”

In 2008, ElSafi married his wife Munira and the couple had two children. He became increasingly worried about his family’s safety when he started receiving death threats from Islamic groups.

“It’s not like they just turned up at your home and arrested you; at least then your family would know where you were. You could just be walking down the street or you’d be in the supermarket and they’d kidnap you. I had one friend who was a poet; he was kidnapped in 1990 and we still don’t know what happened to him. So many people went missing.”

In 2017, ElSafi was invited to attend a conference in Germany. He discussed the trip with his wife and they agreed he should claim asylum in Europe and then apply for his family to join him. “It was a difficult choice but I had no other option, I had to leave.”

The journalist chose to seek sanctuary in Ireland, the home of many of his favourite writers. “I already knew about Ireland because of Oscar Wilde, James Joyce and Samuel Beckett. I had read about the country and knew they respected human rights. It was also well known for its culture, its interest in the arts and had become more multicultural.”

ElSafi arrived in Dublin in June 2017 and claimed asylum. He spent a short stint in a direct provision centre in Longford before being moved to Galway. After 18 months, the International Protection Office, part of the Irish Naturalisation and Immigration Service, recommmended that he received refugee status. However, he had to wait another six months before confirmation arrived from the Minister for Justice that he could remain in Ireland as a refugee.

While in direct provision, ElSafi contacted Spirasi, a charity which supports victims of torture in rebuilding their lives. His connection to the organisation has resulted in many opportunities to continue making art in Ireland. He was recently awarded studio space through the school of creative arts at the Technological University of Dublin in Grangegorman. He has spent more than a month living in Dublin creating an exhibition of work. “I loved it. I got to work in a proper studio where I could reorganise myself and my thoughts. It was freedom; it finally felt like I was free.”

I hope other governments, especially here in Ireland, will rebuild a connection with the new Sudanese government and redevelop that relationship

ElSafi has returned to the direct provision centre in Galway temporarily, but is determined to find a place to live as soon as possible so he can formally submit an application for family reunification to bring his wife and children to Ireland. Having spent more than two years in direct provision, he says the Government should consider redesigning the asylum system, particularly the long delay between receiving a recommendation for asylum and confirmation from the Minister.

Despite the killing of more than 120 protestors in Sudan by armed paramilitaries in June, ElSafi is optimistic about his country’s future, following the removal of the Bashir regime from power. “I believe for the first time in Sudan’s history the people are really behind this government. I believe they will stop the wars around Sudan and bring justice for the people of Darfur. I hope other governments, especially here in Ireland, will rebuild a connection with the new Sudanese government and redevelop that relationship.

“I look forward to starting a new life here. I hope to work on my art and have exhibitions in Ireland and outside the country. I would also like to go back to journalism as it’s my passion. I want to write again.”

ElSafi’s work will be exhibited at Time as Form, Rathdown House, Technological University of Dublin, Grangegorman on Friday, September 20th, 5-9pm. The exhibition is commissioned by Spirasi

Irish woman in San Francisco: Life is quiet but everyone is exercising
10