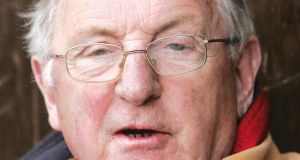 Stan Cosgrove was one of only two Irish veterinarians to be elected president of the British Equine Veterinary Association; the other being his cousin, Max.

Stan Cosgrove’s fame was very much two-faceted. Known to the cognoscenti of the racehorsing world for his professional excellence, he was much more widely known to the public, both in Ireland and globally, as the veterinary surgeon who was in charge of the care of Shergar, the remarkable double Derby (Epsom and Irish) winner of 1981 who, on the night of February 8th, 1982, was kidnapped from the Ballymany Stud in Co Kildare, and never found again. The remains of Shergar are to this day a mystery to all but the perpetrators of the crime, believed to be members of the IRA.

In the weeks that followed, as the world’s press and broadcasters descended on Ireland to follow what became one of the media sensations of that year, Cosgrove was at the centre of the story, attempting to meet intermediaries of the kidnappers to deliver a ransom of £80,000, but ultimately failing to effect the horse’s return.

Cosgrove was obliged to sell his 120-acre farm to defray costs, and for many years thereafter struggled financially

The story was replete with vivid, filmic, moments. On February 11th, Cosgrove, contact having been established covertly with the gang, went to Dublin’s Crofton Airport Hotel and, as instructed, asked the receptionist if there were any messages for Johnny Logan, the gang’s password, so to speak. There were none. The following day, he drove to the Rosnaree Hotel in Co Louth in reply to a message that photographs of Shergar had been left at the reception desk, to prove that the racehorse was still alive.

This second venture was more successful. There were photographs there, and Cosgrove was able to identify them as of Shergar. There followed a period of several more weeks, involving the London-based security consultants Control Risks, which found a channel of communication to the kidnappers, and eventually Cosgrove, accompanied this time by a detective garda, went by arrangement to a remote location in Co Louth, leaving £80,000 for collection in the boot of his car, returning with the garda separately.

It was a cruel stunt. Returning the following day, the garda found the car there, but the money was gone.

Largely out of view of the fascinated public was the degree of real suffering which the incident brought to Cosgrove and his by then large, but still young family. He had been part of a syndicate, including the Aga Khan, which had bought Shergar for £10 million, the Aga Khan putting up £1.5 million and each of the others £250,000, a huge sum to invest at that time for the smaller investors, including Cosgrove.

Cosgrove was obliged to sell his 120-acre farm to defray costs, and for many years thereafter struggled financially.

Despite this considerable setback, Cosgrove, to his great credit, continued with what was by then rapidly becoming a professional practice with a worldwide significance.

In the mid-1970s, he and some colleagues had established the Troytown Veterinary Hospital in Co Kildare, specialising in the treatment of racehorses. This grew rapidly to become widely respected, especially for its specialities in the treatment of colic and of bone injuries. On his death, Brian Kavanagh, chief executive of Horse Racing Ireland, told The Racing Post that Cosgrove had become “one of world’s most gifted equine veterinarians”.

Co-founder of the Irish Thoroughbred Breeders’ Association (ITBA), he served terms both as its president and its chairman, and was admitted, in 2002, to its hall of fame. He was also one of only two Irish veterinarians to be elected president of the British Equine Veterinary Association, the other one being his cousin, Max, known as “Maxie” Cosgrove.

A third considerable achievement was his setting up, with Michael Osbourne and Derek O’Sullivan, of the Kildare-based Race Academy for the training of jockeys.

But it was as manager of Moyglare Stud between 1971 and 2013, in association with its owners, the family of Swiss businessman Walter Haefner, that arguably Cosgrove made his most significant mark. The stud can boast many famous equine graduates, including Assert, the 1982 Irish Derby and Prix du Jockey Club winner; Stanerra, the 1983 Japan Cup winner; Refuse to Bend, winner of the 2,000 Guineas at Newmarket; Go and Go in the Belmont Stakes in America in 1990; and, also in 2002, perhaps most prestigiously, Media Puzzle, owned by Michael Smurfit, in that year’s Melbourne Cup in Australia. In later years, Moyglare-bred Free Eagle won the Prince of Wales Stakes at Royal Ascot in 2015.

For more than 40 years, from 1975, Cosgrove served on the board of Goff’s Sales, the horse racing auction house, as Moyglare and the Haefner family’s representative, retiring only in 2017.

James Stanislaus Cosgrove, always known as Stan, spent all his life in Co Kildare, where he was born the third of six children of James Cosgrove, a doctor in general practice, and Elizabeth Cosgrove (nee Mulvin). He was educated at Newbridge College and University College Dublin, where he was awarded a bronze medal on graduation. A man of deep religious faith, he was a member of Opus Dei, and, in recognition of widespread charitable work done quietly in his native county, he was made a Papal Knight of St Gregory by the then pope, John Paul 11, in 1991.

Cosgrove is survived by his 10 children, Mary, James, Catherine, Veronica, Michael, Paul, Nicola, Emma, Johnny and Sara. His wife, Maureen (nee Keenan), whom he first met while visiting the National Stud where she worked, and his siblings Paddy, Mary, Joe, Una and Sheila, all predeceased him.

Mary McAleese: ‘I’m a bit of an ’oul interrupter. That’s what I hope to be’
6

Paul Flynn: I’d crawl over a mountain of nouveau-riche club sandwiches for a nice toastie
Real news has value SUBSCRIBE