Funeral wreathes reflected passion for NHS and for Celtic FC 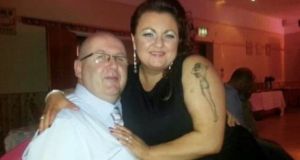 Pat McManus, a Strabane-born nurse who died in England, pictured with his niece Aileen Mullen.

Pat McManus, an Irish nurse working in England, died on April 19th, just a month after his 60th birthday. He insisted on being a frontline care worker despite suffering from multiple sclerosis, an autoimmune condition which puts those who have it in a vulnerable position.

Pat was originally from Townsend Street in Strabane, Co Tyrone. He spent 40 years working as a nurse, first in Northern Ireland and then after he and his family emigrated to London in 1994 where he worked in Northwick Park Hospital and the Central Middlesex Hospital.

Later he worked at the North Staffordshire Royal Infirmary in Stoke-on-Trent before joining Stafford Hospital in the same city.

He was well liked in his place of work both as a nurse and a union official. As the hearse passed the hospital on the way to the crematorium in Stoke, staff from the hospital stood on the grass verges outside and clapped.

Two flower wreathes reflected his great passions in life. One was in the colours of the NHS; the other was one for Celtic FC.

His sons Kevin and Stephen followed him into the healthcare sector though Kevin now works for Transport for London (TfL).

Kevin says his father was offered a managerial role away from the Covid-19 patients knowing the risks involved, but refused, seeing it as his duty to care for sick patients.

“He contracted this cruel virus while working on the front line doing what he’s done for 40 years, caring and looking after others,” Kevin says.

“He was a man who stood up for what believed in and fought for others. He was a proud man who loved ‘his boys’, his grandchildren and all his family very much.”

He was also a union leader and formerly the chair of the Brent hospitals’ unison branch. He was also a supporter of Republican Sinn Féin.

On its website, the party posted: “His dedication, courage and selflessness was exemplified in his professionalism and dedication as an NHS nurse.

“Despite his own underlying health issues, Pat refused to remove himself from frontline duties such was his commitment to help others and to save life.”

Pat McManus is survived by his sons Kevin, Aidan and Stephen and five grandchildren.