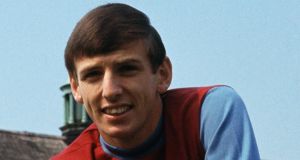 Martin Peters: technique and opportunism were supreme assets that took him to the World Cup finals. Photograph: Central Press/Hulton Archive/Getty

Martin Peters, who has died aged 76, was a key figure in England’s 1966 World Cup side, and a footballer of such intelligence and sophistication that the manager of that winning team, Alf Ramsey, hailed him as “10 years ahead of his time”.

His general awareness of the play around him, his refined technique and his brisk opportunism were supreme assets that also took him to the 1970 World Cup finals and won him various honours with West Ham United and Tottenham Hotspur in the 1960s and 1970s.

As a 22-year-old, left-sided attacking midfielder, Peters featured in five of the six games that England played in the 1966 World Cup finals, and scored in the 4-2 victory over West Germany in the final at Wembley. His first match in the finals had been England’s second, a 2-0 win against Mexico, and he then played in the 2-0 defeat of France. In the quarter-final against Argentina, his West Ham team-mate Geoff Hurst was pulled into the side for the first time in the tournament after an injury to Jimmy Greaves.

The Hurst-Peters double act brought England their winning goal – an inswinging Peters cross from the left that Hurst headed home – at a point in the game when it seemed the 10 men of Argentina would be able to frustrate the home side.

There would be another important goal involving the two of them, in the final against West Germany. With the score at 1-1 in the second half, Alan Ball took a corner from the left, Hurst got in a shot that was blocked, and as the ball ballooned into the air, Peters – so adept at suddenly materialising in the penalty box – pounced on it to score from six yards.

Ramsey’s winning team may have been damned as “wingless wonders”, but Peters’ special contribution from the left flank was essential to their success. Standing at six foot and weighing more than 12 stone, he was a deceptively powerful figure who was well able to resist tackles and was an especially accomplished header of the ball. He also had what his England colleague George Cohen called “a drifting menace” born of subtle, stealthy movement and great vision. As a result, he was often called “the ghost”.

Peters and Hurst had established a potent combination at West Ham, Peters frequently finding Hurst with carefully crafted centres from the wing. Although he became famous in 1966 on England’s left side and was accomplished with both feet, Peters was essentially a right-footed player who established himself at West Ham as a right-half.

The son of a Thames lighterman, Peters was born in Plaistow, east London, just up the road from West Ham’s ground at Upton Park. He showed promise from an early age, winning England caps at schoolboy and youth level, joining West Ham straight from school in 1959, and going on to play five matches for the England under-23 side.

He made his first five league appearances for West Ham in 1961-1962, and became a regular and versatile first-team player thereafter, able to do justice to any outfield position and even, on one emergency occasion, filling in as goalkeeper.

To his lasting chagrin and surprise, the manager Ron Greenwood left him out of the team that beat Preston North End in the FA Cup Final of 1964, but he achieved some consolation the following year when, at Wembley, he figured in the side that beat Munich 1860 2-0 in the final of the European Cup Winners’ Cup. Despite his accomplishments at West Ham, Peters did not win his first England cap until very close to the 1966 finals, against Yugoslavia at Wembley in May, when he had an excellent debut at right-half.

Significantly, Hurst was then with him on England’s pre-World Cup tour of Europe, during which he was able to stake his claim for a place in the World Cup squad. In the two seasons back home on the domestic front after the 1966 win, Peters gradually became restless at West Ham, perhaps because, despite the presence of three World Cup heroes – himself, Hurst and the England captain, Bobby Moore – the club made scant impact in the First Division.

So in the 1969-1970 season, having scored 81 goals for West Ham in 302 league appearances, he moved across London to join Tottenham Hotspur for a then record fee of £200,000, with Greaves going the other way to West Ham. The switch failed to deliver Peters a league championship medal, although Spurs did finish third in his second season there. However, he was twice part of a League Cup-winning team (against Aston Villa in 1971 and Norwich City in 1973, as captain) and won a Uefa Cup winners medal when Tottenham beat Wolverhampton Wanderers 3-2 on aggregate in a two-legged final in the first-ever staging of that competition.

As a Spurs player, Peters went to Mexico in 1970 for England’s defence of their world title. He was not quite at his best during the tournament but was able to resume his partnership with Hurst, the absence of which, at Tottenham, seemed to have taken some of the shine off his game.

In the quarter-final in Leon against West Germany, Peters scored a characteristic goal after 50 minutes. Hurst, in tireless form, sent Keith Newton, who had made England’s first goal for Alan Mullery, speeding down the right flank. Newton’s cross was as good as his first, and Peters duly put it away to give England a 2-0 lead. Inexplicably, Ramsey, who had already pulled off Bobby Charlton, then took off Peters, substituting him with the Leeds United left-half Norman Hunter. England lost the match 3-2 in extra time.

Peters would continue to play for England until the end of the 1973-1974 season, when he won the last of his 67 caps, against Scotland. He would most likely have played in a third World Cup in his early 30s but for an agonising 1-1 draw at Wembley in the qualifying competition against Poland in 1973, when England had 35 shots to Poland’s two but could only come away with a 1-1 draw and therefore failed to make it to the 1974 finals.

Peters was England captain on that night, and the defeat was so painful he never felt able to watch any of the match, either directly afterwards or in later years. He would stay at White Hart Lane for 189 league appearances until the 1975-1976 season, when, aged 31, he upped sticks once more, to First Division Norwich City, where he was made MBE.

It was a successful conclusion to his big-time playing career: he was top goalscorer in 1978-1979, made more than 200 league appearances, and was a popular and effective player there until he left in 1980.

For the 1980-1981 season he appeared at Sheffield United in Division Three as a player-coach, with the idea of eventually taking on the role of manager from Harry Haslam. The job became vacant sooner than anticipated due to Haslam’s ailing health, and after having made 24 league appearances on the pitch (882 throughout his career), he ended his playing days to take on the manager’s job in January 1981 with the team sitting mid-table.

As with so many former World Cup-winning players who tried their hand at management, however, Peters did not have a happy experience. After 16 league games in charge, Sheffield United were relegated into the Fourth Division at the end of the season, and he resigned.

In 1982-1983 he played in defence for non-league Gorleston in the Eastern Counties League, after which he retired from playing and joined up with Hurst to form an insurance-selling business. For a period Peters was also on the board of directors at Tottenham and he later took on hospitality roles both at Spurs and West Ham. He is survived by his wife, Kathleen – whom he married in 1964 after they met at a bowling alley in Dagenham – and by their children, Leeann and Grant. – Guardian

Hugh Wallace: The day I stopped drinking changed my life
7