Every Christmas my uncle gave me shampoo. My brothers got cash

Family Fortunes: Mam always rose to the occasion. Christmas will not be the same 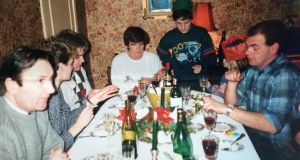 Around the table for another family Christmas

The Christmas Eve party started 50 years ago when my older brothers didn’t want to rise early on Christmas Day. It started at 5.15pm and ended at 8.30pm, with at least one latecomer inevitable.

My own husband, referred to by my mother as “Poor Phil”, arrived after work at 7pm and sat in solitary comfort in the dining room. Stuffing himself, keeping away from the bedlam.

Christmas Eve afternoon I would arrive to stone the cherries for the fruit salad and I can still smell the glazed ham and turkey stuffing and hear the beautiful CD of Christmas hymns.

The meal was a feast of a chicken or fish and turkey and desserts of trifle, fruit salad and chocolate log. At least 16 adults and endless kids and babies would be fed. People from outside the family were invited to their horror or pleasure. Among them were widowed mothers of daughters in law, the childless couple who always had tears in their eyes at the present giving and an elderly single lady who played bridge with Mam and always drank copious amounts of wine before being carted home.

The pattern never varied: a toast on arrival with hearts in our mouths for the beautiful Waterford Crystal. No one will ever forget my sister-in-law dropping red wine on the pale pink carpet, with another sister-in-law insisting she would take the blame as it would be believed to have been her anyway.

Then the kids got their presents, and the black sack was filled with wrapping paper. Inevitably, batteries were forgotten and on one occasion my small niece locked herself in the bathroom, necessitating a rescue by my eldest nephew through a tiny window.

The kids were fed in the kitchen and left playing with their toys, while the adults feasted in the good dining room.

After dinner the adults’ present exchange took place, the highlight being the large sack of totally unsuitable presents from my father’s mother. As a 14-year-old I got a set of knives and my 17-year-old brother got an embroidered tray cover. A bottle of Johnson & Johnson No More Tears shampoo was given to me by my uncle, who worked there every year, while my brothers got cash.

There were sad Christmas Eves as well. One in particular when my sister-in- law was days from dying of leukaemia. But no matter what, my mother always rose to the occasion and catered for the multitudes. This account is meant as an appreciation of her for giving us these priceless memories. It was only six years ago, when she was 80, and after my father’s death that it was acknowledged it was too much. Christmas Eve will never be the same again.