Man launching home-made rocket to prove the earth is flat 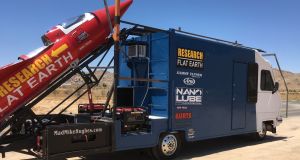 The rocket-build project cost $20,000, including Rust-Oleum paint to decorate it with the words “Research Flat Earth”. Photograph: madmikehughes.com

Mike Hughes, a 61-year old limo driver from Apple Valley, California, is planning to launch his home-made rocket 1,800 feet high over the Mojave Desert on Saturday, in a bid to prove the earth is flat.

In so many ways, this is a parable for our times. Let’s not worry about details or science; you gotta admire self-belief, someone who makes the dream happen.

The self-taught rocket scientist has spent years building a steam-powered rocket from salvage parts in his garage, Associated Press has reported. The rocket-build project cost $20,000, including Rust-Oleum paint to decorate it with the words “Research Flat Earth”, and a motor home he bought for $1,500 on Craigslist, to which he has attached his launch pad.

“If you’re not scared to death, you’re an idiot,” “Mad” Mike Hughes told AP. “It’s scary as hell, but none of us are getting out of this world alive. I like to do extraordinary things that no one else can do, and no one in the history of mankind has designed, built and launched himself in his own rocket. I’m a walking reality show.”

Both the first test of the rocket and also its maiden journey will be this Saturday, when he will try to launch it from an air strip next to a dilapidated hangar in the ghost town of Amboy, in the Mojave Desert, on Route 66 in California. The town of Amboy belongs to Albert Okura, who bought it in 2005 for $435,000; he is also the founder of a chicken restaurant chain. Intruigingly, the fictional town of Radiator Springs in the Disney movie Cars was loosely based on Amboy. Shades of Breaking Bad meets children’s animation.

Hughes constructed the rocket at a five-acre property he leases and calls Rocket Ranch in Apple Valley, California.

As a limo driver he earns $15 plus tips an hour. He cobbled together the money to build his own steam-powered rocket, found aluminum in metal shops and built the rocket nozzle from an aircraft air filter. “I want to inspire others - and you have to do something incredible to get anybody’s attention,” Hughes is reported as saying.

Thankfully, he is not a complete neophyte in the matter of rockets. In 2014 he built and launched a rocket which he jumped on in Winkelman, Arizona, and traveled 1,374 feet. He hadn’t banked on the effect of G-forces and collapsed after landing and took three days to recover.

“I don’t believe in science,” Hughes, whose main funder for the rocket is Research Flat Earth, has said. “I know about aerodynamics and fluid dynamics and how things move through the air, about the certain size of rocket nozzles, and thrust. But that’s not science, that’s just a formula. There’s no difference between science and science fiction.”

In a fundraising interview with a flat-Earth group, which also discussed how NASA was controlled by round-Earth Freemasons, Hughes said of the flight: “It’ll shut the door on this ball earth.”

Hughes only recently took up flat-Eartherism, according to the Washington Post, after struggling to fund Saturday’s flight. He had planned to launch the rocket last year but a Kickstarter campaign (“From Garage to Outer Space!” ) raised only $310 of its $150,000 target.

At that stage the aim of the flight was to “thumb our noses at all these billionaires trying to do this.” He tried other wheezes and eventually announced a plan to prove the flat Earth theory on a flat-Earth community Web show.

“We were kind of looking for new sponsors for this. And I’m a believer in the flat Earth,” Hughes said. “I researched it for several months.”

The webshow host said the campaign needed someone not compromised by the government, “and you could be that man”.

The host pointed out Hughes had at least previously flown in a rocket, while astronauts were just paid actors in front of a CGI globe. Hughes agreed: “John Glenn and Neil Armstrong are Freemasons. Once you understand that, you understand the roots of the deception.”

This is just Mike Hughes’s first step to prove the Earth is flat. After Saturday’s rocket launch, he plans to build a rocket to go miles into space, so he can take a picture of the earth. He also plans to run for governor of California.

On Saturday morning Hughes will create steam by heating 70 gallons of water in a stainless steel tank. Blast off is 2pm-3pm local time. He plans to travel a mile at about 500m/h and an altitude of 1,800 feet, and then pull two parachutes.

Thankfully observers are not welcome due to safety concerns but the launch will be shown on Hughes’s YouTube channel.

Despite having built the rocket, he acknowledges, “this whole tech thing... I’m really behind the eight ball.” But he has a keen eye for publicity: “A guy who builds his own rocket in his garage, about to jump a mile is pretty cool. It’s the most interesting human-interest story in the world.”

Inside an Irish ICU: ‘We are nowhere near the Covid-19 peak’