From stealing my dad’s car to a sobbing admission

Family Fortunes: ‘Finally, unable to bear it any longer, I burst into tears and confessed’ 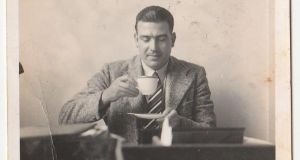 My father, Raymond Donald, who taught me a lesson about truth and cover-up I’ll never forget.

My father bought his first car in 1957 when I was 12. He taught himself to drive, scaring us all in the process.

I started car theft when I was 13: on a day off school, I’d wait until my mother headed out to the shops, then reverse and go forward on the short driveway in front of the garage.

After some months, I wanted to try other gears and steering so I put on my father’s coat and flat cap to make myself look older and drove the neighbouring streets. Eventually my regular route was to Stormont, around the statue of Edward Carson and home.

One day my mother came around the corner near our house and saw the family car. When she realised it was me driving, she dropped the shopping. She gave me a severe talking to but promised not to tell Dad.

Three years later, he said he was going to teach me how to drive and my mother had to suppress laughter and leave the room. He brought me to a disused airfield and I duly stalled the car and crunched the gears. I passed my test first time and gave him all the credit.

That same year, 1962, I went with my parents on our last family holiday to Donegal. Dad let me do all the driving. One night I let them off at the front of the hotel and drove off to park the car.

In the darkness I didn’t see a low wall and put a big dent in the wing. For two days I managed to park the car so that he never saw the dent. As we were loading the car to go back home to Belfast, he saw the dent and exploded.

As I drove he never stopped ranting about people who damaged cars and didn’t take responsibility. Even a note on the windscreen would have satisfied him.

Finally, unable to bear it any longer, I pulled to the side of the road, burst into tears and confessed. The ranting stopped. I heard my mother’s intake of breath, no doubt fearing another explosion. Silence. Until he said quietly, “When you’re able son, drive us home.”

He died when I was in my 20s and I still wonder if he had guessed who had damaged the car and decided to teach me a lesson about truth and cover-up.