Joseph (Joe) Duffy obituary: A ‘fabulous dancer’ who shared his love of the ballroom with his wife Eileen

Lives lost to Covid-19: A switch of careers from tailoring to plumbing saw him setting up his own heating business 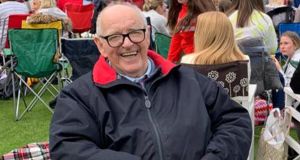 Joseph Duffy, who was known to all as Joe, shared a love of dancing with his wife Eileen. “I met him at a dance in the Metropole ballroom across the road from Clery’s on O’Connell Street” in Dublin, she recalls.

“I think it was a Sunday afternoon dance. Joe was a fabulous dancer and we danced the night away.”

Joe from Fairview in Dublin, was born on February 19th 1937, the youngest boy in a family of seven boys and six girls. His dad was an army captain and his mother stayed at home to bring up their 13 children.

After attending O’Connell school in Marino he did a variety of things, first Rathmines College of Commerce for a year studying commerce, before starting as a tailor’s apprentice in a men’s clothes shop.

He then switched to plumbing and served his time and became a heating contractor, setting up his own business.

Joe and Eileen had bought a house in Coolock where they lived before moving to Malahide.

In 1976 he was involved in a major road traffic incident, suffering a brain injury “and from then on it was downhill. He had a stroke and other life threatening incidents.”

The youngest of their five children – Audrey, Sinead, Bernice, Gary and Alan – was just five months old and the eldest was 10.

Joe subsequently became a sacristan in the local church for 10 years but then had a stroke one morning while serving at Mass.

“He had a tough life of trying to stay alive and he seemed to have come through everything.”

He used to be very interested in old western films but as dementia began to set in three years ago, life became increasingly restricted. He had a turn and went to hospital in December for five weeks before moving to Tara Winthrop nursing home in Swords.

He then had a cold with a cough. “When you said something like that to Joe, he was ‘always dying’. He was always a bit of a character.”

A fortnight later he was back in hospital with a high temperature but was sent back to the nursing home after six days because the hospital said they could do nothing more for him.

Two days before he died on April 2nd, his wife and their daughters Sinéad and Bernice, Sinéad’s husband Eddie and children Amie (sic) and Tom stood at the window as a priest gave Joe the last rites through a window of the home.

Sinéad recalls: “My mother blew him a big kiss and he blew her a kiss and he stood up and held her hand through the window and maybe he knew that was the last time they would see each other.”