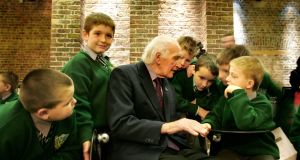 John Gallagher talks with students from Francis Street school in 2007. He was chairman of the board of management there for years. File photograph: Kate Geraghty.

John Gallagher has been described as a colossus and a legend of the Liberties in Dublin.

A community worker, activist, Dublin city councillor for the Labour Party and the city’s deputy lord mayor, he was a cornerstone of The Coombe, where he was born in the last of the old weavers’ houses.

A passionate defender of the city’s heritage, he was chairman of the Liberties Association and one of the main movers in the high-profile but ultimately unsuccessful campaign in the late 1970s to save the Viking site at Wood Quay, where Dublin City Council’s head office was constructed.

For many years a community worker, he was hugely involved in the Liberties Citizens Information Centre, helping local people access social welfare and other supports.

He campaigned for sporting facilities for the area, becoming involved in the Dublin Inner-City Games.

“Going around with him in the Liberties he never got anywhere on time because he would always be stopped by various people who’d have questions for him or just wanted to chat,” his nephew Mark Lawler recalls.

“There was a picture found in one of the papers, and the headline said John Gallagher, more popular than Alfie Byrne in the Liberties,” a reference to the celebrated lord mayor of the city.

He was a very strong, active man, his nephew says. “He used to go and swim in the sea every day, no matter what time of the year,” to bathing areas such as Seapoint or the Forty Foot.

Born in the last of the old weavers’ houses, John had lived with his brother Michael in the Coombe until he moved into Hollybrook nursing home in nearby Inchicore four years ago.

He first stood for election to Dublin Corporation in 1985 to highlight the heroin crisis gripping the south inner-city. Over his three terms he never put up an election poster and did not claim expenses.

A tribute from the local Francis Street school, where he had been chairman of the board of management, described him as a “Liberties legend”, while singer Imelda May said he was “a real gent”.

His unexpected death on March 29th was a shock to family. Confirmation that he had Covid-19 came a day later.

There would normally have been a huge funeral for a man so deeply involved in his community but the pandemic restrictions meant that was not to be. His hearse travelled through the deserted streets of the Liberties, stopping briefly at his home and the community centre where he had been so heavily involved.

At his funeral service an extract was read from the end of The Dead in his favourite book, James Joyce’s Dubliners. But the family plans to host a celebration of his life at a later stage. It will “rival the funeral of Daniel O Connell”, they say.