Frank Halpin obituary: A dapper man who wore a suit all his working life

Lives lost to Covid-19: ‘His favourite place was Skerries and he always believed there was no need to travel anywhere else’ 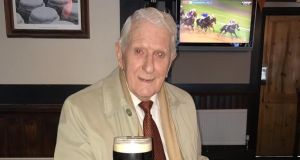 Frank Halpin had a great sense of humour, loved a pint of Guinness and a singalong

Long before the internet transformed the business world, mail order companies were a feature of Irish life and Frank Halpin worked for one of the biggest.

He was a sales manager for the catalogue company first known as Morses, then Family Album and now Littlewoods Ireland, which did door-to-door sales for everything from clothes to electrical goods.

A dapper man, Frank wore a suit all his working life and even afterwards always wore a shirt and tie. His previous experience had also been in the tailoring when he measured people up for suits in a Dublin city centre shop.

Born on March 29th, 1928, he was one of eight boys and three girls, his brother Dominic now the last surviving sibling.

They family owned a butcher’s and a haberdashery in Ballybough, Dublin, and he met his future wife Evelyn when he cycled to her home in East Wall to deliver meat.

“He asked my Mam out and she told us she said yes because he said he’d bring her to the cinema and buy her sweets and cigarettes ’cos he was working,” recalls his daughter Caroline.

All five children – Frank, Gerard, Caroline, Linda and Sandra – were brought up there. “Sandra the youngest died at 41 with lung cancer on August 10th 2005. Mammy died the following day, August 11th.”

A devastating experience for the family; their father was heartbroken. “My Dad loved the two of them so much.”

Evelyn had suffered a number of strokes and Frank took the bus every day from their home in Artane to see her in the Shancarragh nursing home in Glasnevin until her death from sepsis.

Frank wasn’t sporty but he and his wife loved watching the snooker and darts championships on television.

In a tribute, his family said “he had a great sense of humour, loved a pint of Guinness and a sing along.

“His favourite place was Skerries and he always believed there was no need to travel anywhere else, as Skerries held it all for him.

“His yearly holiday in later life was a week in the Red Bank in Skerries with a few walks along the pier and a drive to Loughshinny. We holidayed there as a family every summer when we were kids.”

Frank, who had moved into Care Choice nursing home near Coolock about 18 months ago, tested positive for Covid-19. Only his daughter Caroline got to see him two days before he died on April 7th.

“I was able to tell him not to be afraid and that he wasn’t on his own and that we all loved him and I didn’t want it to sound final because I wanted him to keep fighting.”

He is buried in the old Balgriffin cemetery with his wife Evelyn after a service with some songs and a short eulogy by his granddaughter Sandra Houlihan.

The restrictions have had their impact on the family. “A man who had raised us, loved us, supported us all through our lives and we were left with no closure and a deep sense of loss.”