Am I the only one who thinks Adele looked better before? 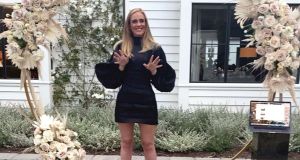 Adele: the singer in the photograph she posted on Instagram today

It’s the smile that says “I’m really living my best life.” In an Instagram post that marked her 32nd birthday, and the finalisation, in recent weeks, of her divorce from Simon Konecki, Adele shared a picture of herself that prompted more than a few fans to do a double take. And, after that, fall over themselves to tweet about beauty, body shape and the merits of a “post-divorce glow up”, whatever that is. “Looks like 140 million isn’t the only pounds Adele dropped off in her divorce,” tweeted one observer.

Social media seems roundly impressed at the singer’s weight loss, which could be anywhere between three and seven stone, depending on which website you consult. If anything, the world’s reaction to her weight-loss journey, on a spectrum from unbridled wolf-whistling lust to cheerful admiration at the “girl done good”, says a lot more about us, and our bodily attitudes, than anything else.

I always loved Adele’s creamy curves, the rounded peachiness of her cheeks, her waterfall of buttery blond highlights. They seemed to complement her whole couldn’t-give-a-fiddler’s demeanour

Am I the only person in the world who thinks Adele looked better before her weight loss, which is reportedly the result of a Sirtfood diet, mainly made up of turmeric, kale, buckwheat and green tea? I always loved Adele’s creamy curves, the rounded peachiness of her cheeks, her waterfall of buttery blond highlights. They seemed to complement her hearty voice and big-room ballads, not to mention her whole couldn’t-give-a-fiddler’s demeanour.

The realness was the thing. Part of Adele Adkins’s propulsion into platinum-selling territory relied on it. Adele was much the same as every other girl her age, dealing with rejection and heartbreak – ordinary, relatable feelings. Adele wore her otherworldly talent and voice lightly, and really did seem for a young audience like the girl you could see yourself hanging out with.

She was the most sneaky-cans-in-the-park pop star that ever was, and we couldn’t get enough of her. Drunk-tweeting, flubbing live performances with an uproarious laugh, giving two fingers to the powers that be, promoting an album with “Don’t buy if you don’t like it” and saying things like “Stop eating? I love food!”, she was more of a palate cleanser than we could have hoped for.

Thank you for the birthday love. I hope you’re all staying safe and sane during this crazy time. I’d like to thank all of our first responders and essential workers who are keeping us safe while risking their lives! You are truly our angels ♥️ 2020 okay bye thanks x

Now, before you set your outrage klaxon to Shriek, let’s clear one thing up. “Realness” and body shape are two very different things. You don’t need to be plus-sized to be authentic; likewise, thinness and true character aren’t mutually exclusive. And Adele’s reported motivation for losing weight was a desire to be healthier for her seven-year-old son, Angelo. It as, as best as anyone knows, not the result of a desire to fit in or blend with the rest of the pop parade.

Yet you do have to wonder, amid the talk of reformer Pilates, 1,000-calorie-a-day regimes and sessions with the Brazilian “body wizard” Camila Goodis, how much of the cackling, devil-may-care Londoner is still there.

Standing today in her €700 Elzinga dress, Adele certainly looks beautiful, if barely distinguishable from any other Insta-gunslinger.

Has Adele kowtowed to the age-old feminine ideal of beauty with a dramatic rebrand? God knows she’s in an industry where that kind of pressure is pretty much inescapable, even if you are preternaturally talented. Or is she merely harnessing her own brilliant transformational power to get healthier?

That Adele hasn’t filled her social feeds with plugs for trainers or #spon posts on wonder potions certainly hints at another possibility: her appearance just isn’t that big a deal to her.

The subtext of which, in that case, is: “This is me. Why should I make a big deal about how I look? I am the same, just a bit smaller.”

Which, when you think about it, is a very, very Adele thing to do.