A medical doctor, he was also a leading light in the Beyond the Fringe comedy revue 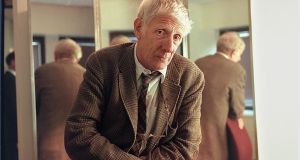 Jonathan Miller at the Metropolitan Opera in New York, 1998. Miller was often called a Renaissance man, a term he disliked, saying it was invariably used ‘by people unacquainted with the Renaissance’. Photograph: Sara Krulwich/The New York Times

Jonathan Miller, the British theatre and opera director known for his radical restagings of classic works, died on Wednesday at his home in London. He was 85.

His death was confirmed by his son William Miller, who said his father had Alzheimer’s disease.

Although he was best known as a director, Miller was a man of many talents. He was regularly called a Renaissance man, and although he disliked the term, which he said was invariably used “by people unacquainted with the Renaissance”, it fit him well.

He first achieved fame as an actor in the anti-establishment revue Beyond the Fringe, a hit in both London and New York. He went on to win acclaim on both sides of the Atlantic for his productions of Verdi’s Rigoletto, Gilbert and Sullivan’s Mikado and other works. He also produced and hosted television shows.

Most unusually, he was a medical doctor, with a special interest in neurology, who periodically left the world of theatre to practice medicine. But his absences – as, for instance, a research fellow in neuropsychology at the University of Sussex in 1983 – never lasted long.

Miller’s theatrical career began at Cambridge University, where he studied science but was also, as he put it, “tripped up” by comedy. He joined the Footlights, the Cambridge theatrical club whose members would later include David Frost, John Cleese and Eric Idle, and starred in two Footlights revues that transferred to London, winning acclaim for his skills as a mimic, before joining forces with Dudley Moore, Peter Cook and Alan Bennett in Beyond the Fringe.

That show, a mix of broad comedy and political satire whose targets included prime minister Harold Macmillan of Britain, had a two-week run at the 1960 Edinburgh Festival before moving to the West End later that year and then, in 1962, to Broadway. There it ran for a year and a half, and the four performers won a special Tony Award.

Miller said then that he found himself “absolutely intoxicated by the United States”. It was, he mused, “a kind of Promised Land, a place where intelligence was at a premium,” and he was “swept away by the intellectual ferment”.

Between performances at the Golden Theater, he wrote movie reviews for the New Yorker, appeared on the Jack Paar and other talk shows, was the subject of an article in Life magazine and wrote and directed scripts for American television. He also made many friends, including poet Robert Lowell, and writers George Plimpton and Susan Sontag, who called him the first person she had met truly at home in both science and the arts.

He did not, however, take a medical post at Mount Sinai Hospital as he had hoped. Instead he returned to London, where he was appointed editor of Monitor, the BBC’s main arts programme.

It was the sort of career choice he often claimed to regret. Like Chekhov, whose Seagull and Three Sisters he staged with great success, he said he regarded medicine as his wife and the stage as his lover.

This attitude was probably influenced by his father, Emanuel Miller, a distinguished child psychiatrist and a remote parent who told his only son that he was squandering his talent on ephemera when he should be engaged in scientific research. That left Jonathan with lifelong feelings of guilt, which led him on several occasions to announce that he was abandoning what he once called “this footling flibbertigibbet world of theatre”.

Jonathan Wolfe Miller was born on July 21st, 1934, in London, where his Jewish grandparents on both sides had settled after fleeing anti-Semitism in what is now Lithuania. His mother, Betty, was a successful novelist; his father was a founder of Britain’s child guidance clinics. Jonathan attended the intellectually demanding St Paul’s School, where he made a lifelong friend of Dr Oliver Sacks, the neurologist, whose journey to international fame began when Miller showed the original manuscript of his book Awakenings to a London publisher.

Then came what he later called “the bad thing I did”: agreeing to remain with Beyond the Fringe in London and New York instead of pursuing the career that had seen him qualify as a doctor, work as a house physician and pathologist in London and write a paper published in the Lancet about the treatment of mercury poisoning.

Upon his return from the US, where he had learned about the workings of television, he not only presented intellectually upscale programmes for Monitor, but also directed dramas for the BBC, notably a dreamlike version of Alice in Wonderland with John Gielgud as the Mock Turtle and Peter Sellers as the King of Hearts.

Miller’s stage directing career began in 1962, with John Osborne’s one-act play about sexual fetishes, Under Plain Cover, at the Royal Court in London. His trajectory continued with a well-received off-Broadway production of The Old Glory, by Lowell, in 1964; and in 1966 with a Broadway farce called Come Live With Me, whose failure left its co-author, Lee Minoff, so disenchanted with Miller that he parodied him as the over-intellectual Jeremy Hillary Boob PhD in his screenplay for the 1968 animated film Yellow Submarine.

In the late 1960s, Miller’s directing career took off, with revivals of Sheridan and Shakespeare at Nottingham Playhouse, leading to his appointment as an associate director under Laurence Olivier at the National Theatre.

For the theatre, he used his medical experience to direct Michael Hordern as a senile King Lear and elicited a major performance from Olivier himself as a Shylock intended to resemble a 19th-century Rothschild. As with a fringe production that transformed The Tempest into a parable about colonialism, with Ariel as a Jomo Kenyatta figure carrying a fly whisk, Miller was putting into practice the credo he later enunciated in his book Subsequent Performances.

Classic plays – he seldom directed anything contemporary – were to acquire new life by setting them in periods and places that would speak to modern audiences.

For a man widely liked for his warmth, generosity, humour and stimulating company – Dick Cavett called him “one of the most amazing conversationalists the world has ever produced” – Miller could be verbally ferocious, as well as surprisingly thin-skinned.

In the 1980s, after resigning from the National Theatre, he denounced prime minister Margaret Thatcher as the culture-murdering equivalent of typhoid, unappreciative theatre critics as “worse than leukaemia” and England as “an ugly, rancorous, racist little place”. Because of these feelings, he increasingly looked outward, turning to opera and staging Mozart, Wagner, Verdi and others in places as far-flung as Los Angeles, Frankfurt, Florence and Tokyo.

Not that he neglected other media or, indeed, Britain itself. In 1978 he presented the BBC’s Body in Question, a 13-part series about human biology during which he performed an autopsy on a dead vagrant. Then he took control of the BBC’s Bardathon, in which all Shakespeare’s plays were televised, several of them directed by Miller himself. In 1983 came States of Mind, a 15-parter in which he interviewed the art historian Ernst Gombrich, the philosopher and scientist Daniel Dennett and others about consciousness and the brain.

In 1986 he returned to Broadway to direct Jack Lemmon and a young Kevin Spacey in a revival of O’Neill’s Long Day’s Journey Into Night, notable for the overlapping dialogue that shortened its usual running time. And from 1988 to 1990, he was artistic director of the Old Vic, often reviving lesser-known classic drama and staging Jean Racine’s Andromaque and Pierre Corneille’s Liar.

But it was his production of Leo Janacek’s opera The Cunning Little Vixen at Glyndebourne in 1975 that proved to be truly career-changing. An unusually realistic Figaro for the English National Opera was followed by Britten’s Turn of the Screw and the “mafia” Rigoletto, set in 1950s New York, that triumphed in London in 1982 and at the Met in 1984.

Other international successes included a Mikado set partly in 1930s Hollywood, a Mussolini-period Tosca and, in St Louis in 1982, a Così Fan Tutte that led the New York Times’ Donal Henahan to write that Miller was thinking more incisively than anybody about how to bring opera to modern audiences.

In addition to his son William, he is survived by his wife of 63 years, Rachel Collet, a doctor; another son, Tom; a daughter, Kate; and several grandchildren.

Miller once said that his life had resembled a butterfly’s, moving from flower to flower. “But,” he added, “they do pollinate.”

“There is a point to their existence,” he continued. “I hope there is to mine.”