Jennifer O'Connell: There’s no cohesive British identity anymore, if there ever was

'What is Britain, then?' the American woman asked, stumbling on the toughest existential question of all 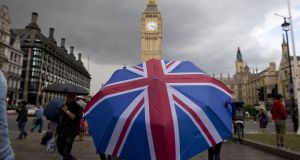 London, which is in England, which is part of the United Kingdom. “So what is Britain, then?” the American woman said, audibly exasperated. I wanted to tell her she isn’t the only one. Photograph: Justin Tallis/AFP/Getty Images

“Wait a minute. So we’re in England now?” the woman in the cafe in Temple Bar was asking.

“No, we’re in Ireland, ” said one of the men sitting opposite her.

Naturally, I took a sneaky look. They were a group of Americans in their 30s, with expensive backpacks and fine-wool sweaters. The men had neatly trimmed beards; the women had clear skin and long, loose hair that shone with generations of good nutrition. The conversation started, as conversations these days tend to, with Brexit. But it quickly became clear a bit more background was required before it could progress along meaningful lines.

“No,” the man went on, with the confidence of one who had taken the time to read even the boring bits of his Lonely Planet on the plane over. “It’s Northern Ireland that is in the United Kingdom. This is southern Ireland.”

“So what is Britain, then?” she said, audibly exasperated by the geopolitics of this perplexing little corner of the world. I wanted to lean over and tell her that she isn’t the only one. Exasperation, incomprehension and frustration are practically enough to get you an Irish passport these days.

He gave it a shot. “Britain is the island England is on, with Scotland and Wales,” he said, with a certainty that I’m sure Theresa May could not muster.

His recollection of the rest of this part of the Lonely Planet must have been a bit hazy because he dived further back into history to explain how, in the late 1700s, Northern Ireland had “voted to join Britain”.

“And now Britain is voting to get out of Europe, ” he finished, finally. The woman, far more in tune with the current political climate than she realised, had clearly had enough of Brexit and thorny questions of what “Britain” might entail. She’s not the only one.

She stood up. “Will we go to the Guinness Storehouse?”

What is Britain? It could be said, that’s the question at the heart of this whole shambles.

In Ireland, we’re used to dealing with confusion about what “Ireland” might mean. For all we bask in comforting notions of Irish exceptionalism, we don’t have to look too far for evidence that the rest of the world has, at best, only a murky understanding of what Ireland is – at least, no further than Temple Bar on an average weekday.

As a consequence, we’ve developed a neat line in defining ourselves in opposition to others’ misperceptions: politely informing people of other nationalities that no, we’re not actually part of the United Kingdom; and no, we don’t eat a lot of corned beef; and yes, we do have “a gay Taoiseach” but that’s not the first thing most of us would say about him; and yes, we do like to string a lot of vowels or consonants together when we’re naming our children; and no, we don’t do it just to appear mysterious. Sadhbh and Caoimhe and Tadhg are real and perfectly lovely names, and not just an attempt to trip foreigners up.

There’s no cohesive British identity anymore, if there ever was

The British, on the other hand, have always taken it for granted that the rest of the world has a good handle on what Britishness means, and what Britain stands for. Multicultural melting pot. Stiff upper lips, stubborn resolution and an unfailing ability to queue. Keeping calm and carrying on. Rolling fields and unshakeable resilience.

These days, though, public displays of Britishness include some less romantic sights. A doughty John Bercow bellowing “The nos have it”. Theresa May croaking out populist vitriol. Westminster in paralysis. Politicians pitting themselves against the institutions they are supposed to answer to and uphold. A rush on Irish passport application forms.

There’s no cohesive British identity anymore, if there ever was – only Remainers pressing for Leave lest they appear weak. Or Hard Leavers intimating they may actually be Sort of Maybe at Some Time in the Future Leavers. Or Can I Change My Mind Remainers. Or Leave Means Leavers. Or Can We Stop Talking About It Pleasers. Or Leavers who have just remembered they have an Irish grandmother.

Even after some form of political resolution is reached, they’ll all have to find a way to live together. The trickiest question now is not what Britain’s future relationship with the EU will be – it is what “Britain” will be afterwards. Because even after the urgent political, institutional and economic questions have been resolved, the distrust and the vitriol and the identity crisis that have been stoked up will linger on.

“What is Britain, then?” the American woman asked, stumbling on the toughest existential question of all. Wouldn’t we all like to know.