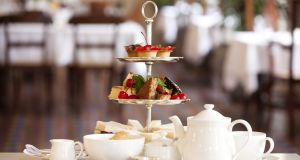 There is something thoroughly decadent about afternoon tea. Photograph: Getty Images

Have you experienced the joy of being presented with a triple-tiered tray of treats, both sweet and savoury? There is something thoroughly decadent about this delicate culinary pastime. It’s all dainty sandwiches – no crusts, if you please – and petite patisserie, and tea silently sipped with pinkies up.

Who do we have to thank for this elegant pastime? The invention of afternoon tea is widely attributed to Anna Maria Russell, Duchess of Bedford, who plugged her peckishness by filling the gap between luncheon and dinner with a selection of sweet and savoury snacks brought to her rooms. The duchess and her husband Francis Russell, the 7th Duke of Bedford, lived at Woburn Abbey, just north of Luton outside the environs of London.

Their home has been open to the public since 1955 and one of the 22 rooms visitors can experience today is the Duchess’ Tea Rooms. The property’s website states that the custom of taking afternoon tea was popularised by Duchess Anna Maria in the 1840s. “A Lady-in-Waiting to Queen Victoria, Anna Maria began the custom of taking afternoon tea at around 5.00pm,” reads the blurb for an event called Two Centuries of Afternoon Tea at Woburn Abbey taking place on 28 August 2019 in the Duchess’ Tea Rooms, “and it became a popular part of the day at Woburn Abbey and the Royal Palaces”.

Dig a little deeper and of course there are questions around how much or which parts of the rituals of afternoon tea can actually be credited to the duchess. After all, the duchess didn’t leave behind any selfies or sepia-filtered Instagram shots of her afternoon tea with the girls.

Furthermore, there are references to afternoon tea that date before her lifetime. According to the Tea Geek (www.teageek.net), afternoon tea or at least the custom of taking a light meal in the late afternoon was established as early as the 1740s.

Perhaps it was the duchess’ influence that added the combination of bite-sized morsels of sweet and savoury snacks, which welcomed the use of multiple serving trays. It’s possible that it was the duchess’ influence that introduced the idea of afternoon grazing as an activity appropriate for high society, and that it was effectively she who made it cool.

According to www.afternoontea.co.uk, the duchess began to invite friends to join her for afternoon tea at her rooms in Woburn Abbey and “...this summer practice proved so popular that the duchess continued it when she returned to London, sending cards to her friends asking them to join her for ‘tea and a walking the fields’. Other social hostesses quickly picked up on the idea and the practice became respectable enough to move it into the drawingroom. Before long all of fashionable society was sipping tea and nibbling sandwiches in the middle of the afternoon.”

Some exceptional spots for afternoon tea in Ireland include Mount Juliet Estate in Kilkenny, Ballynahinch Castle in Connemara, the Merrion Hotel in Dublin and Hayfield Manor in Cork. Time to put your pinkies up and make a tea toast to the duchess.