Relax, our National Performance Anxiety Day will be over soon

If it’s any consolation, St Patrick’s Day is even more pressure on the ones who got away 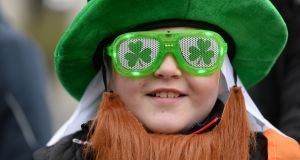 Caolan McKenna from Tyrone enjoying last year’s St Patrick’s Festival parade in Dublin. There was a time when watching a slow-moving caravan of Massey Fergusons and frostbitten scouts was considered high entertainment in this country. Photograph: Dara Mac Dónaill

It’s not that we don’t want to spend time with our friends from abroad. We’d hop on a plane and meet them in London in a heartbeat. But there is something in the Irish psyche that lives in trepidation of having visitors – or, more precisely, of disappointing visitors.

Tourists are often bemused by how much time we spend apologising for things we can’t be expected to control – the rain, the prices, the litter, the hotel breakfasts, the national monument to disappointment and the norovirus bacteria that is the Blarney Stone. I suspect it’s because many of us grew up in a house with an entire room dedicated to visitors.

It didn’t matter if there were six children crammed into a single bedroom upstairs: nobody was allowed inside the good room on the 364 days and 14 hours a year it remained unoccupied, in case that was the moment Fr Duff chose to arrive for his twice-annual cup of tea and ginger nut. The phenomenon of the good room destroyed us for visitors.

The feared words came in an email last spring from a family of lovely South American friends. Please don’t stress, they said. We just want to see you. I stressed. I planned. I managed my way out of the inevitable tailspin of anxiety by drawing up a spreadsheet that ensured their every moment would be scheduled. There were to be days out in the Dunmore East Adventure Centre; sailing trips and virtual Viking experiences; walks in the Comeraghs and on the Waterford Greenway; excursions to Kilkenny Castle and Hook Head and Fota Island; dinners in Waterford Castle.

Sorry, I said constantly. Sorry about the queues. Sorry about the endless sunshine. Every morning, I greeted them with a list of their options for the day, like an aspiring Butlins redcoat. It turned out that they really didn’t want to do a tour of the southeast’s every attraction – they really did just want to see us. They left after five days, more worn out than they would have liked but, I think, happy. Their favourite bit was the amusements in Tramore, followed by chips on the prom.

Which brings me to St Patrick’s Day, or as I prefer to think of it, National Performance Anxiety Day.

As the country fills up with visitors on a once-in-a-lifetime quest to encounter some charming locals, and avail of peak shenanigans and maximum craic, we understand what it must have meant to be Alanis Morissette right before the release of her second album. We’ve lived through enough St Patrick’s Days to know it is basically New Year’s Eve with even more pressure and added plastic shamrocks. At its best, it’s a sweaty, tipsy crush of people convinced that this can’t be it, and that the real fun must be happening somewhere else.

That kind of scheduled exuberance doesn’t bring out the best in us. We’re much better craic when we’re left alone to be slightly miserable. Cynical, twisted and smart-arsed is our natural state.

The best possible outcome is that all that expectation will fizzle out quietly into a fistful of passive-aggressive TripAdvisor reviews. “Like watching a traffic jam interspersed with groups of purple-legged, frozen little Irish dancers, small judo/kung fu practitioners and different sizes of scouts,” goes one disappointed – and, to be fair, not entirely inaccurate – review of a small town parade on TripAdvisor.

There was a time when watching a slow-moving caravan of Massey Fergusons and frostbitten scouts was considered high entertainment in this country. There wasn’t much else to do in the Ireland of the early 1980s, before we all got passports and notions and Netflix. Milling into Monster Munch and Iced Caramels in the annual tradition known as Breaking Lent was about as good as it got.

If it’s any consolation, St Patrick’s Day is even more pressure on the ones who got away. Imagine trying to live up to the expectations created by a green Statue of Liberty, or a green Victoria Falls. Or even a green Clock Tower of Albania.

When I lived in the US, I spent the GDP of Limerick on green synthetic tat in Target, and still managed to turn out the least impressive – by some margin – display of Irish national pride at school that day. And there were only two other Irish families in the place. They didn’t do much better. We were a disappointment to our American neighbours on many counts: we were unable to proffer any advice on the best ways to serve corned beef or trap a leprechaun, and we didn’t even seem to be drunk yet.

The key takeaways from it all: St Patrick’s Day is overrated. Tramore is underrated. You can’t do anything about the rain, the litter, the crowds or the expectations, so stop apologising. Maybe they really do just want to see you.

Happy National Performance Anxiety Day. It’ll all be over soon, and we can go back to celebrating our Irishness by being slightly miserable.