Gillian Freeman obituary: Novelist who explored homosexuality in her work 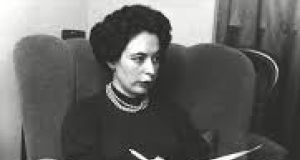 Gillian Freeman: ‘I have never set out to propound themes, only to tell stories’

Gillian Freeman, a British writer whose claims to fame included a 1961 novel about a marriage threatened by a homosexual attraction, and a fictional diary of a woman in Nazi Germany, died February 23rd in London. She was 89.

Her daughter Harriet Thorpe said the cause was complications of dementia.

Freeman, who also wrote screenplays and scenarios for ballets including Kenneth MacMillan’s Mayerling, published her first novel, The Liberty Man, in 1955. Like many of her subsequent books, it dealt with social and sexual distress, in this case a relationship between a middle-class teacher and a sailor of nebulous sexuality.

After The Leather Boys came The Leader (1965), a fictional tale of neo-Nazism in England

Homosexuality came into play more directly in The Leather Boys, her 1961 story of a heterosexual couple who marry too young and soon find their relationship in jeopardy, in part because the husband develops a close bond with a male biker.

The novel was published under the cheeky pen name Eliot George, but three years later, when Freeman wrote the screenplay for a film of the same title, she used her real name.

Assessing the book and film in 2015 for the Gay & Lesbian Review Worldwide, Richard Canning wrote, “The Leather Boys was and remains groundbreaking”. The book and, more so, the movie, he said, “made a pitch for the normality of male homosexuality, offering one of the first portrayals of it between working-class characters”.

In 1978, Freeman and her publisher, Anthony Blond, came up with Nazi Lady: The Diaries of Elisabeth von Stahlenberg, 1933-1948, which purported to be the daily accounts of a woman trying to climb the social ladder in Nazi Germany. The book, as Blond recounted in his 2004 memoir, Jew Made in England, was at first published with a generic-looking vintage photograph on the cover and no sign of Freeman’s name. Some people, he wrote, took it for a real diary.

“A nice buzz was beginning to generate,” he wrote, “the book started to sell – then pop! – the Evening Standard revealed that Elisabeth only existed in the agile mind of Gillian Freeman.” He added, “Though we never stated that Elisabeth von Stahlenberg was ever real – people just wanted her to be – the book was damned a hoax.”

It was still fooling at least some people a quarter-century later.

“Red faces at Canongate, which has just published a handsome anthology of war diarists, The Secret Annexe, edited by Irene and Alan Taylor,” the British magazine The Bookseller reported in 2004. “The book includes an extract from Nazi Lady: The Diaries of Elisabeth von Stahlenberg, published in 1978 (Blond & Briggs). Nothing unusual there, until we remember that the book was a work of fiction.”

Gillian Freeman was born in London. Her father, Jack, was a doctor, and her mother, Freda (Davids) Freeman, was a homemaker. She graduated from the University of Reading in 1951 and had various jobs, including copywriter and schoolteacher, before Blond, trying to build a career as a literary agent, secured publication of The Liberty Man. That book was followed by Fall of Innocence in 1956 and Jack Would Be a Gentleman in 1959.

“I have always been concerned with the problems of the individual seen in relation to society and the personal pressures brought to bear because of moral, political or social conditions and the inability to conform,” Freeman wrote in an autobiographical essay. “This is reflected in all my work to date, although I have never set out to propound themes, only to tell stories.”

After The Leather Boys came The Leader (1965), a fictional tale of neo-Nazism in England, and The Alabaster Egg (1970), a historical novel, among other books.

Nazi Lady, the 1978 diary, was quickly republished as The Confessions of Elisabeth von S,” with Freeman’s name on the cover as author. That same year, Freeman collaborated with MacMillan on Mayerling, a ballet based on a historical incident involving the crown prince of Austria. She worked with MacMillan again in 1981 on his ballet Isadora, about Isadora Duncan.

In addition to her daughter Harriet, an actress, she is survived by her husband, Edward Thorpe; another daughter, Matilda Thorpe, also an actress; and five grandchildren.